It’s winter, and for us that means it’s project season. Nearing 3 years of too many projects to count (but also a lot of sailing), I’ve been asking myself – did we actually end up with a project boat? While shopping for a boat, the one thing I was sure of was we didn’t want a project boat!

I had heard of people buying project boats and spending years working on them without sailing. I have a lot of admiration for people who do that, but for us sailing and cruising was always the number 1 goal. If a project boat meant we couldn’t cruise, we’d be better off continuing to charter and sail in clubs.

I’ve written before that eventually I realized all boats are project boats (“What Exactly is a Project Boat Anyway?“). And even though living aboard has made it easier to work on projects, the project list hasn’t gotten any shorter. For every project finished, we discover one or two new ones.

[Note: I’ve added a Projects page to the site, listing most of the major and minor projects completed] 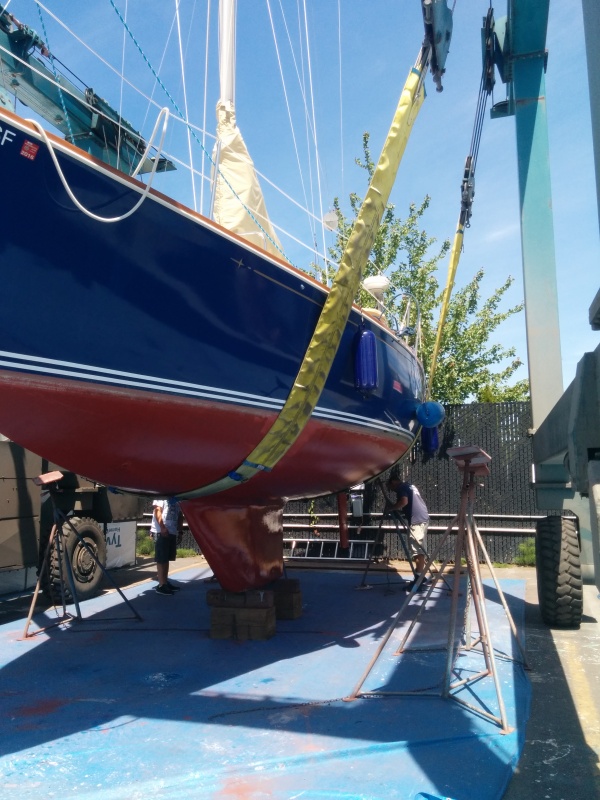 Another reason I didn’t want a project boat was I understood that boats are expensive but not in the initial purchase cost – an old boat is only as much as two new cars, which many middle-class families have (and if you told them two cars are a luxury rather than a necessity, they would probably disagree). The real budget killer is in the carrying costs – yearly moorage and maintenance.

In 3 years, we’ve spent 70% of the purchase price of the boat on projects – maintenance, parts, haul-outs and a small amount of labor. Since we’ve done almost all project work ourselves, only a small amount of spending was on hired labor – which is usually around $100/hour in the marine industry.

Counting moorage, we’ve spent 100% of the purchase price in three years. Of course, we expect project costs to go down in future years now that we’re done with a lot of the big stuff. The “big stuff” – two haul-outs, a transmission rebuild, and a rerig – account for 50% of total project costs. But maintenance on a boat never really ends, and those who think boats are expensive due to initial purchase price are probably either buying new (or newish) boats, or are bad accountants (not tracking all their maintenance/upgrade costs).

Interestingly, although we’ve only hired out about 30-40 hours of labor, those account for almost 20% of total costs. We’ve done over 2000 hours of labor ourselves. Doubling the hired hours (because they’re probably twice as efficient), that’s still only 4% of total labor hours making up 20% of costs. That goes to show if we had hired say 50% of all projects we could’ve spent 200-300% of boat purchase price by now. 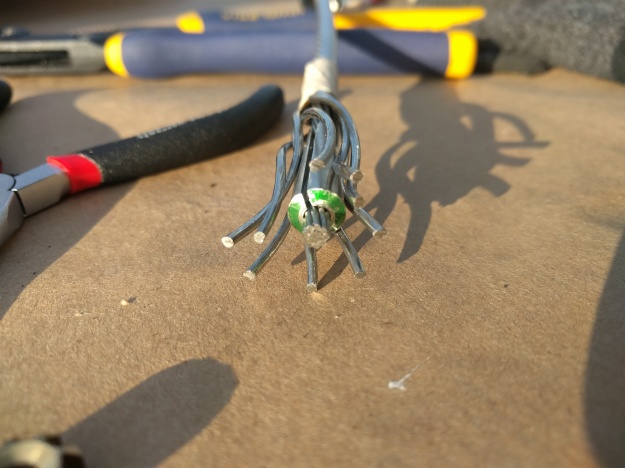 What is a Refit?

But what is a refit really? Yacht listings often boast that the boat had a refit, but that word is meaningless without defining what was done. It’s like remodeling a house – if they just painted the walls and updated the curtains, that’s very different from someone who added an extension, upgraded all the kitchen appliances, replaced the house wiring, re-roofed and redid floors.

As with the term “project boat”, refit is a continuum of different degrees. I take it to mean a significant amount of money was spent updating an old boat to meet modern boat standards. Of course, whose standards? That’s why it’s somewhat useless to use the term “refit” and better to define what projects were done.

Our Model for Project Work

On the other hand, our boat was not a project boat in the extreme way I envisioned that term. It didn’t sit in a yard for 2-3 years, and it was cruise ready the moment we bought it. So perhaps the spectrum of project boats can be put into two categories: boats that are ready to go, while doing some work on them, and boats that are so far neglected that they’re unsafe or un-cruise-worthy. 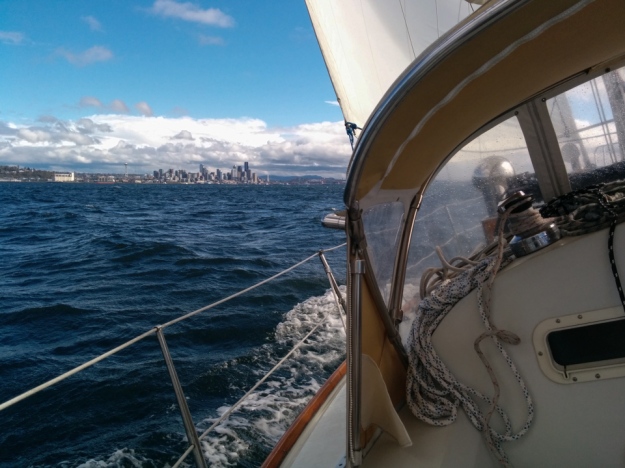 We wanted to do a refit with none of the sailing downtime that sometimes involves. For some people, the model of decommissioning their boat to work on it continuously for a year or two works for them, but I never would have been able to live with that. To justify having a boat rather than chartering and club sailing, I felt we needed to be using the boat for sailing and cruising.

So the priority has always been to minimize decommissioned time.

Decommissioned time (when the boat isn’t sailable) can be for something as big as a haul-out to something as simple as having too much stuff strewn about to be able to stow it in a reasonable amount of time.

We employ a few strategies:

This does require some careful planning however. The peak of the PNW sailing season is only 3-4 months long, so to get in significant long cruises requires finishing all the project work well before the summer. So every year we do most of our project work in the winter and spring. Most other PNW cruisers seem to have figured this out too, but some still wait till summer, when all the marine service providers are swamped with long waitlists.

Each year we’ve actually been shifting our project time earlier and earlier – now it really ramps up in November and we aim to get the big stuff done by February or March. We learned that aiming to wrap things up in May or June is foolish because boat projects always take longer than you think – plus we’re busy with other things like provisioning for our summer cruise, making arrangements for mail, our car, work, etc. And, if any of the projects require assistance from a professional, most of those popular people are already swamped by April.

In retrospect, in the boat buying process I had no clue how much work a refit can be, or what constituted a project boat, or what our standards would be for a boat. This is something you really just need to learn through experience.

But, I learned I actually like boat projects, at least most of them. So even though we basically finished the “refit” 6 months ago, having finished all the essential safety projects, I’ll still continue doing projects for as long as we have the boat. After all, it’s a boat – the projects never end!

4 thoughts on “Oops, We Bought a Project Boat!”

New on the blog: How to Replace Frameless Windows on a Boat. (link in profile) This past November/December we finally had time to replace our 4 cabin windows. The difference was amazing - night and day! #boatlife #boatwork #boatprojects #sailing
Nuchatlitz inlet in July, west coast of Vancouver Island. The beach has lots of shells from old middens. #Cruising #Sailing #Exploring #BC #VancouverIsland #Midden #OptOutside
Winter time is when we think back to memories from our cruising season like this one from Rugged Point on the west coast of Vancouver Island. Eagles are very much abundant in BC! #BC #WestCoast #VanIsle #Cruising #CruisingLife #BritishColumbia #Eagle
2019 was a big year. We started out in Argentina, then traveled to Peru, Costa Rica and Mexico. In March we returned to the boat and began 6 months of cruising in April, including circumnavigating Vancouver Island for our first time. We're excited for more adventures coming in 2020! #bestnine #top9 #Sailing #SailingLife #Vagabonding #Travel #PNW #CruisingLife #Sailboat #Adventure #HappyNewYear
Spotted this big red crab hanging from a fender. He's missing two forelegs, probably lost to one of the otters or sea birds that fish in Salish Sea marinas. I guess he was big enough or fierce enough to get away. #Sealife #SalishSea #Crab #SailingLife #Survivalofthefittest #livetofightanotherday
The weather has certainly been "interesting" lately. Non-stop rain for 3 days as part of an atmospheric river, aka Pineapple Express. Pretty tough but this is what makes summers here so appreciated. I've been having fun playing with Windy.com, and noticed a huge low pressure system (2nd photo) visiting the Gulf of Alaska on Christmas. Wow. #Weather #PNW #SailingLife #Winter #AtmosphericRiver #Washington #Rain
Winter sailing. A good trip to Poulsbo this weekend with the PSCC cruising club. Downwind in 10-15, and upwind in 8-10. #WinterSailing #Sailing #PugetSoundCruisingClub #Seattle #PNW #Cruising #Poulsbo #Sunrise
Pretty excited for these beautiful new genoa sheets, which I got for 90% off (only $25 plus pro splicing costs) in the West Marine moving sale. #nofilter #sexysheets #staset #newenglandropes #sailing #splices
Scenes from Race Your House last weekend. Also a new post on the blog (link in bio): "Transition to Winter", on how we find balance between cruising and a taste of normal life. #Sailing #Sailboats #FallColors #CruisingLife #LandLife #PNW #SloopTavernYC