Recently some other Pacific Northwest cruisers have reached out to me asking which cruising guides we used for our passage north last year. It can be tricky choosing cruising guides because the older ones tend to get out of date quickly, and some have spotty coverage or a different cruising style than ours.

Over the last 4 years of cruising we’ve found some good ones that work for us. Finding good educational books on sailing and boat maintenance is also tricky (there are so many!) so I’ve included a few recommendations on those too.

Waggoners is probably the most popular, complete, and frequently updated cruising guide in the PNW. For marina services in particular it’s usually the best source out there. We use it to figure out which marina has good drinking water, nice showers (sometimes free!), convenient laundry, or a nearby grocery store.

We use Waggoners a bit less for anchorages, especially on the Central and North coasts of BC – where the Douglass guide (see later) is more comprehensive.

Another caveat is since Waggoners is written by motorboaters, we find their passage / routing advice isn’t always useful. They’re selecting for optimal motorboat conditions – little wind and minimal sea state, leaving early in the morning and sticking to the most protected channels. If we followed that advice we’d get very little sailing in. (see Marilyn Johnson’s book later for a resource on this)

Best Anchorages of the Inside Passage, by Vipond and Kelly

These folks are sailors, and like to seek out the quiet, remote, gunkholey anchorages that we like as well. So we found their anchorage recommendations are often very good. The book doesn’t cover the full Inside Passage though – it stops somewhere after Fitz Hugh Sound on the Central Coast.

Another thing to keep in mind is their first boat was fairly small I believe and they’re comfortable squeezing into very small spots. Some of their trickier anchorages might be a bit too challenging for some, especially those on larger boats.

The book is a whopping 550 pages thick! That should tell you a bit about how many anchorages the Central and North coasts of BC have. It covers approximately from Queen Charlotte Strait to Prince Rupert (to the border of Southeast Alaska), and includes Haida Gwaii.

The 3rd edition was updated in 2017, but much of the content was written in the 1990’s (original edition was 1997, and 2nd edition was 2002) so just something to keep in mind (it has anchorage entrance information from pre-GPS days).

It’s an essential book if you’re going past Cape Caution.

Taken By The Wind: A Guide to Sailing the Coasts of BC and SE Alaska, by Marilyn Johnson

This is really part cruising guide, part sailing education. It’s a book on how to sail while cruising in the PNW. You might think a book on this isn’t necessary, but it really is. Most cruisers don’t sail much in the PNW if they’re going long distances – they motor. We love sailing though and found it’s entirely possible to sail at least 80% of the time, but only after learning a set of techniques and routing tricks. Tactics and strategy.

Most of this you could learn on your own, but it might take several years. Marilyn’s book is a shortcut to learning about wind cornering, headland effects, wind lifts around islands, wind shadowing, etc. – complexities that are common to the islands and straits we have so much of here.

Her strategy for Johnstone Strait is a good example of what the book has to offer, and if you want a sample of that you can read her article in the May 2018 issue of 48 North.

Don Casey’s book has a lot in it, and it’s a reference manual we turn to first if we have some kind of issue while cruising. It’s easy to read and a bit more basic than the next book (Nigel Calder), so if I can find what I need in here it’s the quickest option.

It also has a section on inspecting boats during the boat buying process, so it’s a useful book even if you don’t have a boat yet. 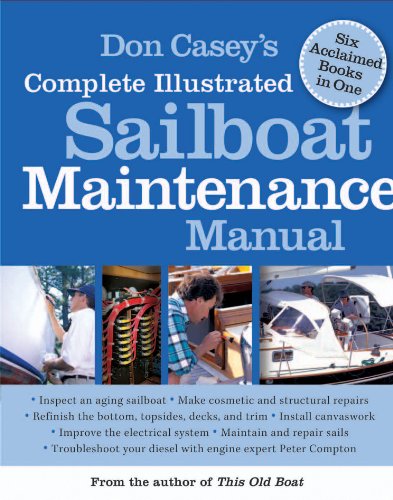 Nigel Calder’s book is probably the best, most comprehensive reference manual for boat issues and maintenance. The diesel engine chapters are especially valuable, and get quite advanced. I really like the tables he includes with probabilities of different engine issues (ex, a clogged fuel filter or air leak is more likely than a bad fuel pump). It helps narrow down and prioritize your troubleshooting steps if you have an issue in an area far from help (and Internet!).

Introductory cruising books (like ASA’s Bareboat Cruising Made Easy) are great for learning the sailing basics, but once you get beyond that, learning advanced sail handling techniques can be more difficult. There are many sailing books geared towards racers, which we’ve found isn’t always useful (because they assume you have 5+ crew and are usually prioritizing getting an extra 0.1 kts of boat speed rather than improving boat handling).

Illustrated Sail & Rig Tuning however is one that I have found useful. It’s a relatively short, quick read but has detailed advice on things like genoa sheet lead positions, spinnaker techniques, etc.

Buy, Outfit, and Sail was one of the first books I read when contemplating the cruising dream. Goodlander’s enthusiasm and scrappiness influenced me a lot. The “go now” (or as soon as you safely can) philosophy was helpful and especially his focus on just the essentials – his criticism of people who waste time and money (years!) on unnecessary comfort items was a big influence on me.

At the same time, some of it steered me a bit wrong – some comfort items are important, and the prices he quotes are from the 1980’s (or earlier) and not adjusted for inflation (no it’s not possible to get a free boat (sunk in a hurricane) and refit it for $3000 into a world-cruising-ready boat these days).

The Voyager’s Handbook, by Beth Leonard

The Voyager’s Handbook is like a manual on how to adopt the cruising lifestyle. It’s geared towards sailing the world, but most aspects still apply even if you’re sailing regionally.

I especially liked the chapters towards the end where she discussed emotional and lifestyle impacts of cruising, such as how it might change you in a way that would make it difficult to return to normal life afterwards.

While cruising it’s good to have some go-to books for entertainment as well. Most of these I load onto my Kindle – it’s really convenient for cruising boats that don’t have a lot of storage space. Natalie will churn through a book a week but I get through fewer. These are a few of the books I’ve read that connected to the sailing experience in some way.

It might seem morbid to read a sailing disaster book while sailing, but I’ve found it works really well. I read this one while we were battling through Johnstone Strait for our first time. Each day we had adverse winds, sometimes quite strong, and Johnstone can be scary to first-timers.

But having a story to read of someone in much worse conditions made me feel better – a good reminder that our winds and waves were nothing compared to a much worse scenario. 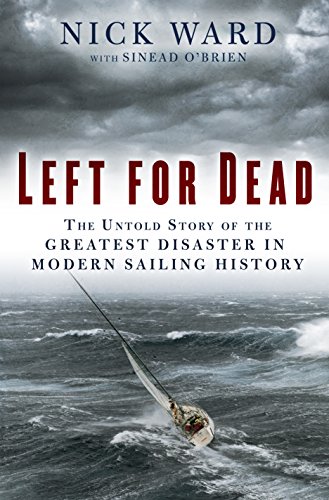 This could be under “Sailing education” but I put it under entertainment because we hope to never have to use these techniques (and in reality most sailors won’t). But even if you don’t plan to use survival techniques it’s still a really good read.

The Pardey’s other books are also good. They’re the cruisers that invented the phrase “Go simple, go small, go now.” For an overview of the Pardey’s history, Herb McCormick’s As Long as It’s Fun – The Epic Voyages of Lin and Larry Pardey is also good.

Sailing a Serious Ocean is also a storm tactics book, but a bit more well rounded than the Pardey’s book. The Pardey’s are really gung-ho about heaving-to being the best storm tactic, but Kretschmer is more balanced with presenting multiple options (heaving-to isn’t always the best tactic – there isn’t 100% agreement on it in the sailing community). 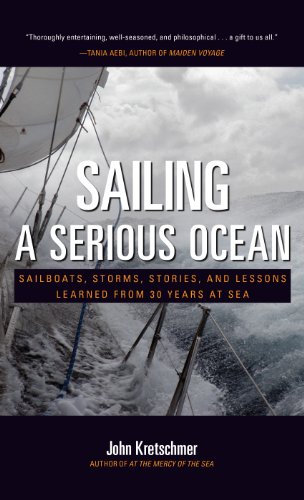 The Book of Joy: Lasting Happiness in a Changing World

This book is based on interviews with the Dalai Lama and Archbishop Desmond Tutu. It’s about finding joy – not just finding happiness in a moment or an activity but what makes people joyful over a lifetime.

I was surprised to discover practically everything the Dalai Lama says is full of wisdom. The kind of wisdom that takes most people a lifetime to acquire, or that some never do. This kind of book makes a good sailing book because it seems most of us sailors pursue sailing because it brings some kind of deep and fundamental joy to our lives.

Sailors also seem to appreciate Buddhism – several books about it are on Delos’ reading list as well. When you’re sitting in a remote anchorage surrounded by nature it certainly affords a lot of time for quiet contemplation and meditative states.

Joshua Slocum’s book is a classic and one probably every sailor has read. And there’s no reason not to when it costs less than $4 now!

Vagabonding: An Uncommon Guide to the Art of Long-term World Travel

The book Vagabonding by Rolf Potts is like my travel bible. It explained a lot of ideas I already had but couldn’t put into words. If you want an inspirational read about how to redesign your life to travel – and why to travel in the first place – this is a good read. Adopting the cruising lifestyle has allowed us the freedom to travel a lot (by land/air) but also sailing is a form of travel as well.

[Note: This page contains Amazon affiliate links which give us a small referral fee if you make a purchase within 24 hours of clicking the link. We only recommend things we like, and you’re always free to purchase it elsewhere or without the referral link if you wish.]