We’ve been sailing together since 2010, and bought our boat Violet Hour in Jan 2015. For 3 years we worked on boat improvements and maxed out our vacation time to get in as much sailing as we could (in 2016 taking unpaid leave for 3 months). In 2017 we moved onto the boat in Shilshole, selling many of our possessions and accelerating our learning and immersion in the lifestyle. In April 2018 we finally made the leap to quitting our jobs and going full-time cruising / traveling.

Patrick is an East Coast transplant from Long Island working as a software engineer in Seattle for the last 9 years. He’s an adventure junkie who also enjoys rock climbing, mountaineering, skiing, photography, cycling, and homebrewing beer. He first learned to sail in 2003 at the Naval base in Newport, RI on Rhodes 19’s while doing an internship programming robotic underwater submarines. Once in Seattle, he sailed on Lake Union with the Center For Wooden Boats and then moved on to the Seattle Sailing Club, sailing many of their boats racing and cruising on Puget Sound. 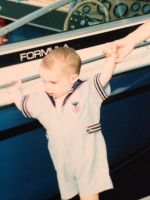 Even as a baby Patrick had aspirations as a sailor

Natalie is a true PNW (Pacific Northwesterner) who grew up where most of the Cops episodes were taped; Lakewood, WA. Her family religiously camped, hiked, biked and fished every summer and were known to take random trips to Mt. Rainier on a moments notice. She moved to Seattle for college and has stayed ever since. She is a self proclaimed foodie who loves to cook and knows how to throw a good party. Traveling is also one of her hobbies and she is always up for a good adventure. Everything she knows about sailing, she has learned from Patrick, and the ASA 103 course she took last spring (passing both the 101 and 103 tests).

3 thoughts on “About Us”