In August, the 5th month of our 6 month cruising plan, we went from the Gulf Islands to Garrison Bay in the San Juans. August was a *BIG* change from our previous months. We didn’t go very far, and many times we stayed in the same anchorage for 3-4 nights. This was our plan all along though – we wanted to hang out somewhere nice, yet not go very far at all, because August is typically the worst month for sailing.

The first week we sailed through the Gulf Islands (early August had great wind!) and then we spent the next 3 weeks bouncing between Friday Harbor, Sucia Island, Shaw Island (Blind Bay), and Deer Harbor. The San Juans were starkly different in August than when we came through in April. They were super busy, with motorboats zooming everywhere and the marinas and anchorages were all very chaotic and busy.

This took some getting used to, after months of sparse boat traffic (July was a bit busier, but August noticeably more so). But we enjoyed the short days because it gave us lots of time for hiking, photography, blogging, catching up on boat chores, etc. 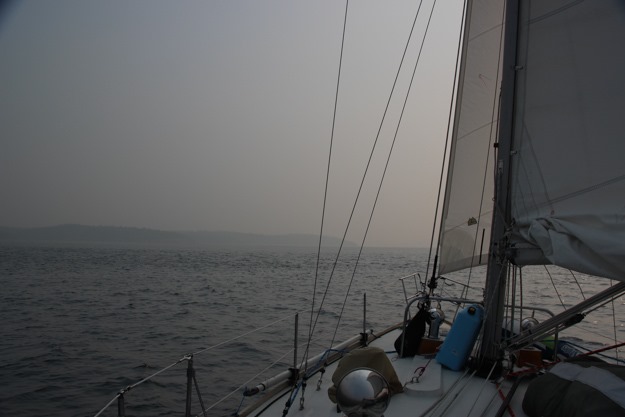 The #1 impact on our August cruising though was the forest fire smoke. I’ll talk more about that under Weather, but the short version is that the Pacific Northwest has been blanketed by dense forest fire smoke for the last few Augusts, and it really puts a damper on being outdoors.