A lot of cruising blogs seem to only have nice things to say about the places they visited. It gives the impression that everything is always sunshine and rainbows for them – which if true is great, but for us everything isn’t always sunshine and rainbows. We try not to be too cynical, but there are definitely a few places where if we had known what it was like, we probably wouldn’t have gone there. We’d rather know about the bad things along with the good, rather than be in the dark. Although everyone’s experience is different – what was bad for us might be great to someone else.

South Puget Sound – from the Tacoma Narrows to Olympia and adjacent inlets – is an area some guides and reports we’d read say is a wonderful cruising destination that is too often forgotten by the many boaters who primarily travel north (to the San Juans and BC). For us though, cruising means sailing, and in the South Sound we had the least sailing we’ve had all summer.

No Wind Makes For Sad Sailors

We really enjoyed visiting the city of Olympia, but it would’ve been much easier and quicker to drive there. We did close to 30 miles of motoring each way, and south of Gig Harbor there was basically no wind for four out of the five days we were there. Completely flat water without a ripple in sight, and less than 2 knots registering on the wind meter – morning, afternoon, and evening. One day we got 4-5 knots for about 20 minutes, and raised sails, but it quickly died back to zero.

August often has little wind in Puget Sound – so perhaps the South Sound is a good destination only in the shoulder seasons (fall and spring). But even though Puget Sound was getting 10 knots, according to the West Point NOAA station and Washington State ferry readings, we were getting none. And as soon as we left the South Sound and got to Gig Harbor, we had wind again.

Passing under the Tacoma Narrows bridge

I think the topology of the land around the South Sound creates a massive wind block. When there’s 5-10 knots in Puget Sound, that wind gets shut down by the hills and channels south of Tacoma Narrows. We had far less wind than we usually find in the San Juans and Gulf Islands as well, places that are not known for lots of wind in the summer but where we usually find enough for good sailing.

South Sound is probably a great destination for powerboats, because wind doesn’t help them, and they don’t mind motoring – that’s their standard mode of travel.

No Wind, Except for the Nighttime Gale

Well, one day we did get wind – at 2am we had small craft advisory level winds spring up suddenly in our anchorage, gusting to nearly gale force. We were anchored on the south side of Hope Island (about 8 nm north of Olympia). A user-contributed note on the Navionics charts said the south side is unprotected from south winds, but the NOAA forecast that day hadn’t predicted strong south winds. And that whole day it was completely calm.

But at 2am the winds came up to 20 to 25 knots, with gusts to 28 (later that day NOAA issued a small craft advisory). We didn’t sleep much, since the noise created by 25 knots makes it pretty hard to sleep. As each new gust whipped around Hope Island and hit the boat, we’d heel over a bit and swing on the anchor rode (which I had increased to 4:1 scope) and our deck cleat would make creaking noises (I think it’s plenty secure, it’s just that an 18,000 lb boat in 25 knot winds puts a lot of force onto the cleat and deck). 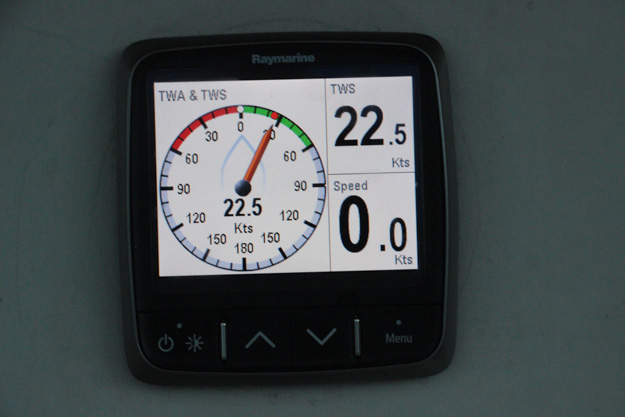 We had plans to meet family in Olympia that day, so unfortunately we couldn’t use the south winds to run north. After the sun rose, we tried to wait it out, but that didn’t work (the high winds didn’t ease till 8pm) – so we took off at 11am. We sailed upwind with a reefed genoa only, but the wind was extremely gusty and shifty. One minute we’d have 15 knots and the next minute we’d have a gust to 25. Also frequent shifts of up to 90 degrees as we rounded the point to Budd Inlet.

This makes for some really difficult sailing. No one else was sailing upwind, and about 8 boats were sailing downwind, 6 of them with genoa only. As we sailed around the point, we mightily confused on oncoming powerboat. We had right of way, but were changing our course every 30 seconds as we got gusts from 15 to 25, along with wind shifts around the point. As the gusts came along we had to round up about 30 degrees to avoid broaching, and then as the wind dropped again we had to head back down to avoid stalling.

Eventually we just motored since it wasn’t worth fighting these gusts upwind for only 6 miles on pretty short tacks in Budd Inlet. We hoped the south wind would stick around the next day, but the South Sound abruptly went back to zero wind days.

There’s no question that the views of Mt Rainer are better in the South Sound!

Once we made it into Olympia, we had no trouble docking at the Percival Landing marina (fortunately the southerly gusts were blowing onto dock). Percival Landing is in a better location than the Swantown marina, and there was plenty of room open on E dock (the only one that has power/water).

We met up with Natalie’s grandfather, who was excited to get a tour of the boat, and other family members. Dinner at Fishtale Brewing Company hit the spot.

Considering how much we had to motor in the South Sound, it was surprisingly difficult to find fuel. Olympia, with several hundred boats moored there, doesn’t sell any fuel. Boston Harbor, a small marina six miles to the north, does have fuel, but when we pulled up to the fuel dock they told us their distributor had mistakenly poured gasoline into their diesel tank, so they’d have no diesel for several days while they worked on getting that fixed. The next port we had planned to visit, Gig Harbor, also doesn’t sell fuel. Fortunately the next nearest fuel dock, at Zittel’s Marina, wasn’t too far off our course, and did have diesel. 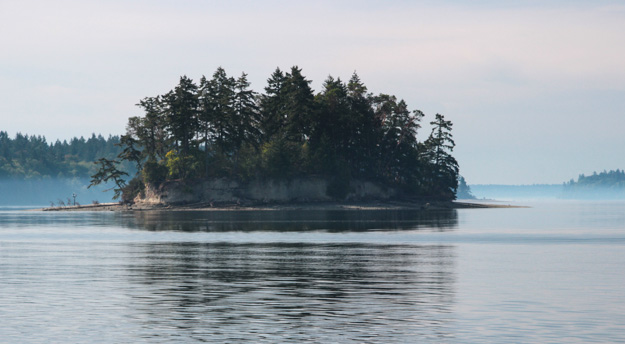 South Sound does have some nice anchorages. Again I think shoulder seasons might be better though. All three anchorages we were in had speeding jet skiers and speedboats zipping around until dusk. South Sound anchorages were also more crowded than Seattle anchorages at this time (Blake Island and Blakely Harbor are nearly deserted this week), so I guess the rumor about cruisers ignoring the South Sound doesn’t apply in August.

We went to Penrose state park (Mayo Cove), Hope Island, and Eagle Island. The hike on Hope Island was really great, and the island has a caretaker’s house with a field of apple trees. Eagle Island was my favorite anchorage of the trip. We anchored slightly south of the mooring ball on the west side, with a view of Mount Rainier. Note there’s only one mooring ball at Eagle Island, not 3 or 4, as indicated in Waggoner’s and on Navionics charts. Currents flow through this area, so getting a good spot is a little tricky.

There are lots of seals playing in the water around Eagle Island. In the morning at low tide we saw about 30 of them lounging on the beach on the east side. There’s a short hike on the island, but each way dead-ended in brambles – so it doesn’t loop around the island, and only takes about 20 minutes.

The hike on Hope Island took us past a deer grazing under the apple trees. 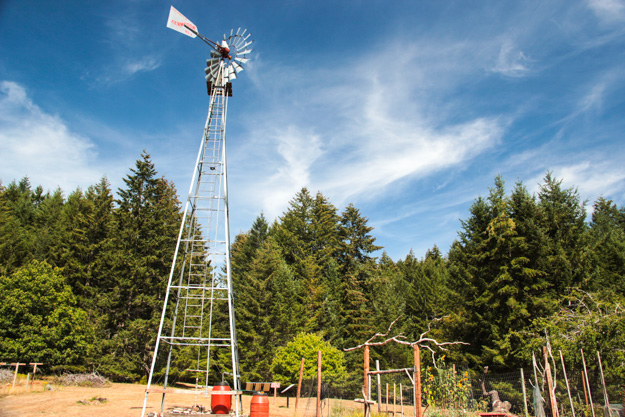 As soon as we returned to Gig Harbor, we had wind again – yay! We’re enjoying some great downwind sailing in 8-15 over the next few days on our way to Poulsbo (anchored at Blake Island tonight).

Motoring on our way out through the Tacoma Narrows, we had heavy fog – visibility dropped to only a few hundred feet and we were traveling at nearly 9 knots (3 knots of current push). We turned on the radar, checked AIS on my phone for any shipping traffic, and used the GPS to line up between the bridge pylons (which we couldn’t see until we were almost upon them). And even did a broadcast over the VHF to check for any other traffic. 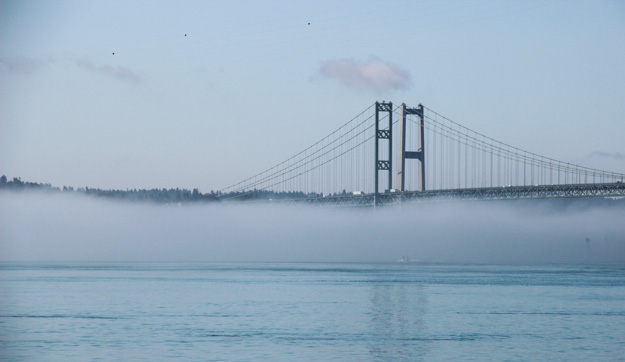 After exiting the fog. The fog was hugging the water, but up top – at car level – it was clear.

5 thoughts on “Windless in the South Sound, Except for the Midnight Gale!”