The Central Coast of British Columbia, stretching from Cape Caution to McInnes lighthouse, is quite possibly our favorite cruising area in all of the Pacific Northwest. It’s a huge area that is often underestimated – while it’s possible to pass through it in 2-3 days (and many people do just that), it’s equally possible to spend 2-3 months happily cruising here. With hundreds of anchorages and dozens of passages, inlets and sounds, in some ways it feels like a larger cruising area than the San Juans, Gulf Islands and Desolation Sound combined.

For that reason we spent 4 weeks here, mid-May to mid-June, as it’s our turnaround point before heading south. The wonderful sunny, summer-like weather we had in the second half of May certainly had something to do with the great time we’ve had. At the end of May we had 80 F days and were wearing shorts and no shoes a lot of the time. While here we’ve seen five black bears, over the course of four separate occasions, and plenty of other wildlife – humpbacks, eagles, seals, etc. 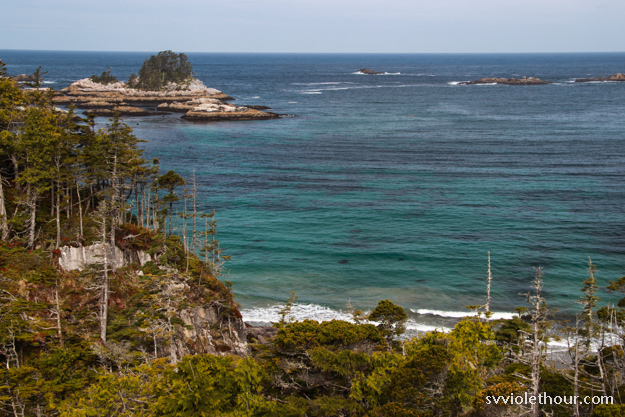 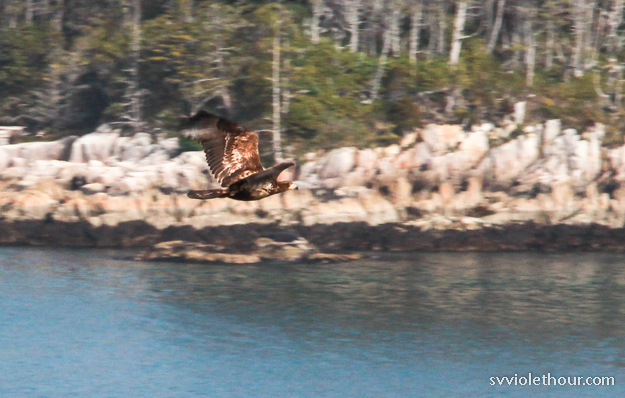 It hasn’t been sunny all the time though – in early June it switched to about a week of near constant rain. This can be tough, as everything gets wet and we feel cabin-bound in the boat. But it’s something we know to expect in the early season, and I still think early season is the time to be here. We were here last year as well and loved it then too.

Following the R2AK (Race to Alaska)

We enjoy following the Race to Alaska via the tracker, and last year it worked out that we were on the Central Coast while some of the R2AK boats were sailing by. This year we were actually at Shearwater, which is even better because the boats are required to pass through nearby Lama Passage. The lead boats don’t usually stop into Shearwater unless they need an emergency repair, but we still were able to see three boats in Lama Passage when we were leaving. There was no wind so they were all rowing / pedaling / paddling.

We also had the excitement of seeing Givin The Horns come into dock at Shearwater because their rudder had broken in half. It was a disappointment for them because they were in second for a while, but I think they had a lot of fun meeting the boating community there. And they did an amazing job building a new rudder out of plywood in less than two days. 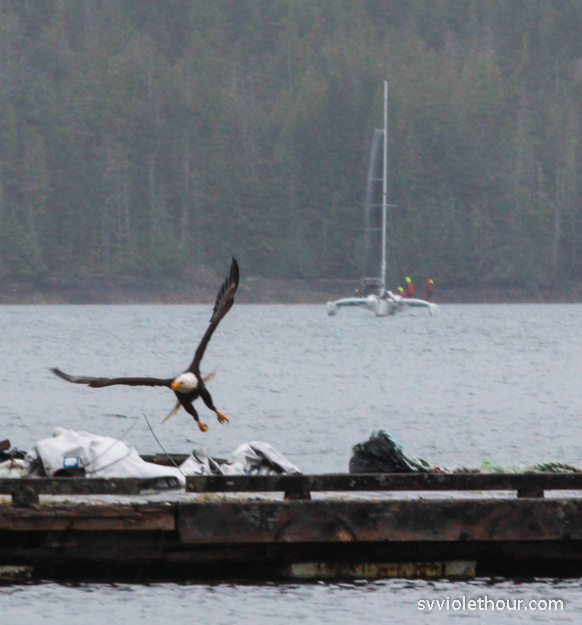 The next day we saw four more R2AK boats working their way up Fitz Hugh Sound. Another reason we love seeing R2AK boats is they’re the only other sailboats that are sailing with us. Although they represent less than 10% of the sailboats up here, they represent over 80% of the sailboats we’ve seen sailing (other than R2AK boats, only 3 out of ~50). They also show us the boundaries of what is possible (and barely sane), doing things that no other boats do, and in a way that no other sailboat race does.

Since we had so much time on the Central Coast this year, we made an effort to visit new anchorages. We weren’t in a rush, and often only had 10-15 nm between anchorages, so were able to sail all the way usually (even if that took 4-5 hours). I already wrote about the four spectacular days we spent in Dean Channel, so I’ll just cover a few of the remaining ones we liked here.

A 30-40 knot northwest gale was forecast for Hecate and the Central Coast in late May, so we headed inland from Pruth Bay (which is well protected from NW fetch but receives a lot of the wind) to Green Island anchorage, just a 6 nm broad reach from the exit to Kwakshua Channel. We managed to sail all of Kwakshua Channel, because the wind generally flows east there. 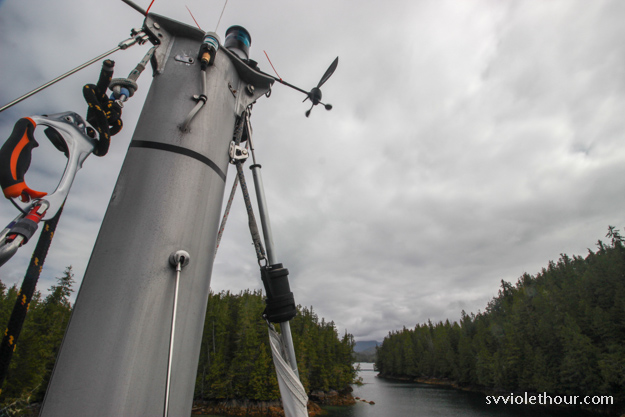 Doing my annual rig inspection (last year it was on the Central Coast too!). 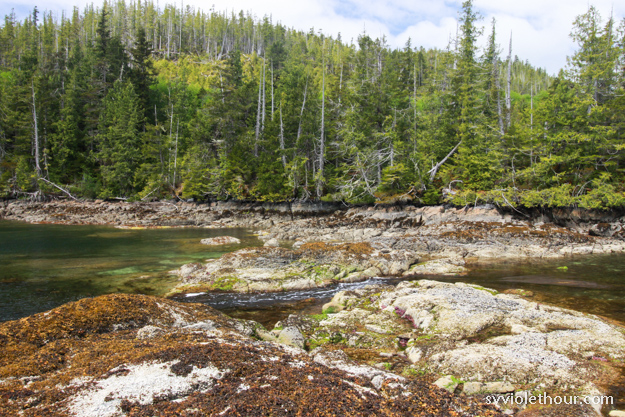 From Green Island anchorage we motored our dinghy up the nearby inlet to check out some lakes.

Green Island anchorage made for great protection from the gale – we had only swirly, gusty wind up to about 15 in our little nook. And even better, we ran into our friends on S/V Longreach, who we met at Port McNeill last year. They’re super fun and it was nice to have a couple happy hours with fellow cruisers. 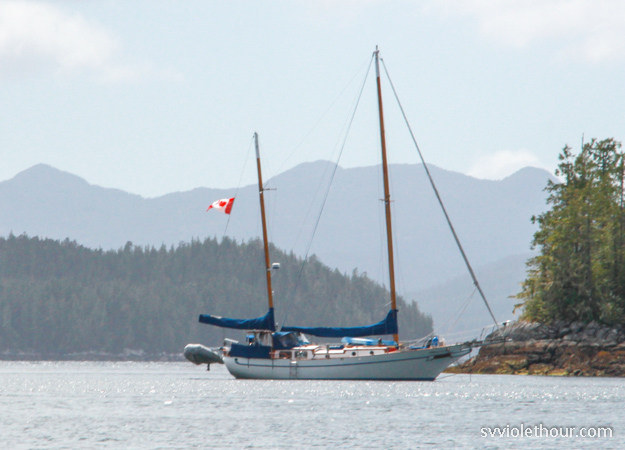 Kisameet Bay is an anchorage that is often passed by, but turned out to be well worth the stop – sort of a hidden gem. We had a beautiful view, many calm islets to explore via paddleboard, and tons of wildlife – eagles, seals, river otters, oyster catchers, painted ducks, and underwater life (sea stars, urchins, sea cucumbers, crabs, and small fish).

It’s just about 7 nautical miles south of Codville Lagoon, so we had a short sail the next day. The wind generally inflows up channel north of Hakai Passage, so we put up only the spinnaker in 10-16 knots and had a fun run. 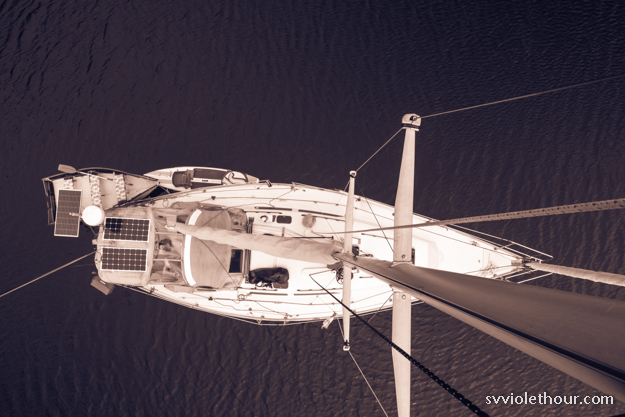 We went to Codville last year as well, and enjoyed the short hike to Sagar Lake, which has an unusually nice sandy beach along its shore. We had probably even hotter weather this year (80 F and sunny) and were the only boat there! In late June last year we were one of six there. 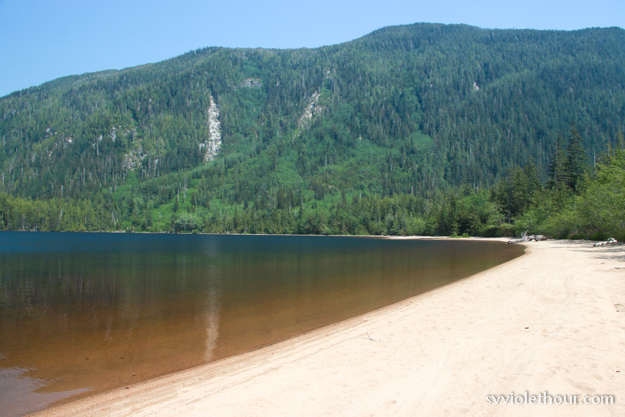 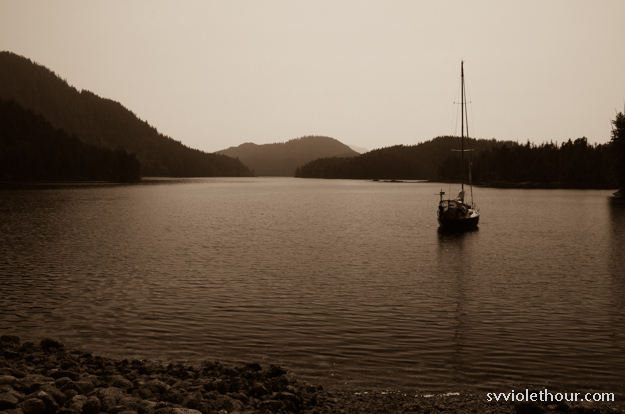 Codville was just a short stop though and the next morning we decided to head up Dean Channel towards Ocean Falls and beyond.

Discovery Cove is south of Troup Narrows and about 10 nm north of Shearwater. It’s a fairly popular anchorage (we found 3 motorboats and 1 sailboat there) but is large and has several nooks so everyone can have basically their own spot.

Our first night and morning was very rainy (the dinghy collected probably 10 gallons of water!) but once it cleared we had a great view of the tall forested hillsides around us. I took the paddleboard out and spotted a large black bear grazing in one of the grassy areas. Always fun! I’ve discovered the paddleboard is a super useful tool for sighting bears – an engine will scare them away before you get a good view, but a paddleboard is quiet enough that they never even notice you (I keep at least a 1000 foot distance). 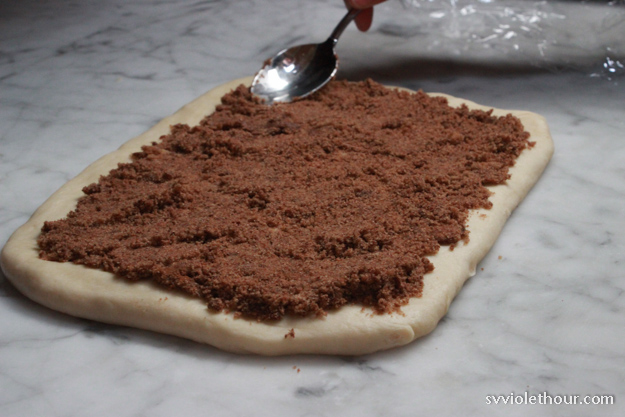 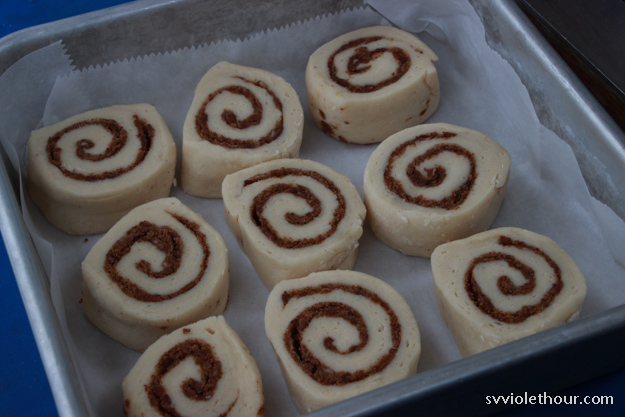 We also had hundreds of moon jellyfish and a couple dozen fried egg jellyfish (big ones) in Discovery Cove. It must be due to the narrow, shallow entrance into a pretty deep (1 nm long) anchorage. There were also some sea stars visible at low tide while paddleboarding, and a large school of small fish.

One anchorage I wouldn’t recommend was Raven Cove (a few miles northwest of Dryad Point and southeast of Wigham Bay, which is a better anchorage). Raven Cove has a rocky bottom, which our Douglass book warned of, but it ended up being even worse than expected.

Our Rocna anchor can set okay in rock, but Raven Cove was a mix a giant boulders and medium sized rocks. Our depth sounder randomly varied from 25’ to 50’ in the span of a half boat length, indicating enormous rock piles and spires on the bottom. Getting a good set is a matter of hooking the right rock.

But it was blowing 15 knots in the cove, from the westerly in Seaforth Channel, and although our anchor did hold (after dragging for 20-30’ before finding a good rock to snag on) I wouldn’t have much confidence in it for higher wind. And if you’ve ever anchored on a rock bottom with wind up, you know the CLUNK, CLUNK sounds of the anchor can drive you crazy. There was plenty of clanging, banging and clunking as our anchor and chain banged against whatever rock pile it was wedged into. 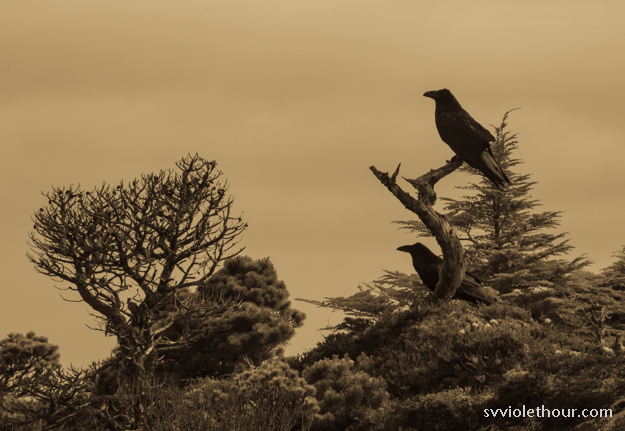 These ravens weren’t at Raven Cove, but they should’ve been.

Sailing All The Time

The sailing is great on the Central Coast, and we’ve been sailing basically all the time. Some of the tight channels can be tricky, but I wouldn’t say it’s any harder than Puget Sound. We’ve been lucky to have a consistent presence of wind – not in direction or strength, but in simply having wind every day. Once you know the wind patterns here, and know not to leave in the morning (aka, being a motorboat), it’s pretty easy to learn how to sail between nearly every anchorage. 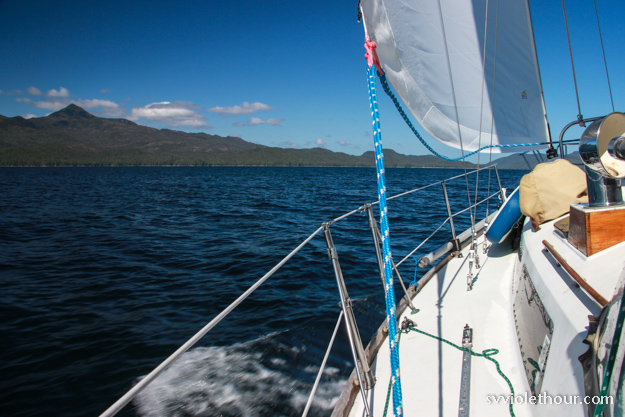 Fitz Hugh Sound and several nearby channels (Fisher Channel, Seaforth Channel, Lama Passage) are very sailable. It pays to have a spinnaker here – when there’s 15-25 knots out on Hecate Strait, there’s usually about 10-15 on the inside routes. 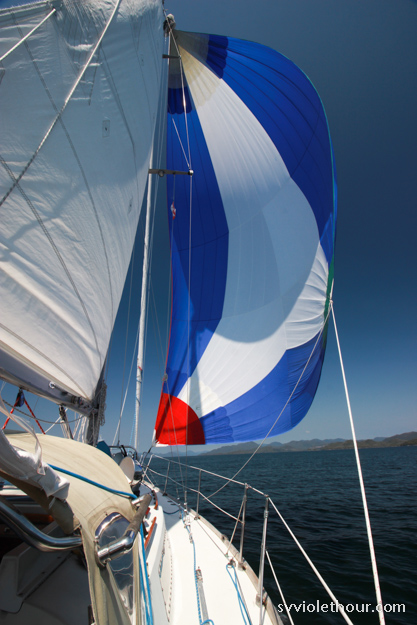 Don’t expect wind directions to be intuitive though. When the Central Coast forecast says northwest wind, that’s the general pattern on the outside, adjacent to Hecate Strait. But on the inside channels the wind can funnel in all sorts of directions – ex, north of Hakai Passage the wind usually funnels from the southwest, so you can have a downwind run even though you’re going north.

May was a much easier month than April was, and everything has been working well on the boat. Now that we got a few “shakedown” items fixed, it’s been gratifying to feel like we finally have a well tuned cruising machine. The autopilot project was the last piece of the puzzle and gives us confidence in being able to handle whatever conditions the sea throws at us.

And our upgraded solar (to 300 watts) has been ample enough to allow us to stay off-grid indefinitely. On sunny days we end the day at 100% because the solar supplies all our electrical needs. We’ve had some really rainy days where we barely eek by, because it’s nearly as dark as night during the daytime, but if the sun comes out even just for an hour or two that’s usually enough to top up.

Currently we’re at Pruth Bay waiting for a weather window to sail around Cape Scott on the northern end of Vancouver Island. From here the sailing gets tougher and the seas bigger (ocean swell) – but I think we’re ready for the challenge. 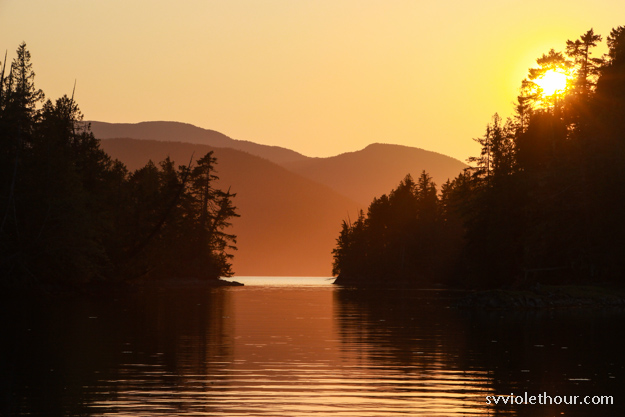 2 thoughts on ““Central Coast is the Best Coast”: A Month of Cruising the Central Coast from Cape Caution to Bella Bella”