In the last three days we’ve had the first genuinely tough days in the 45 days we’ve been cruising. Day one we were beating upwind in 20-25 knot winds with awful steep waves generated by wind against current. The next day we were sailing slowly in dense fog, not able to see more than 1/10th of a mile.

Finally the 3rd day we rounded Cape Caution in 6 foot swell without enough wind to sail – motoring for about 3 hours in waves that tossed our boat around and made me feel seasick.

Part of our trepidation is due to knowing we have two potentially much worse passages ahead – crossing 70-90 miles of Hecate Strait to south Haida Gwaii, and later sailing 110+ miles from the southern tip of Haida Gwaii to Cape Scott at the north end of Vancouver Island. At average 5 knots those passages will be over 24 hours, and there’s no quick refuge if conditions get miserable. 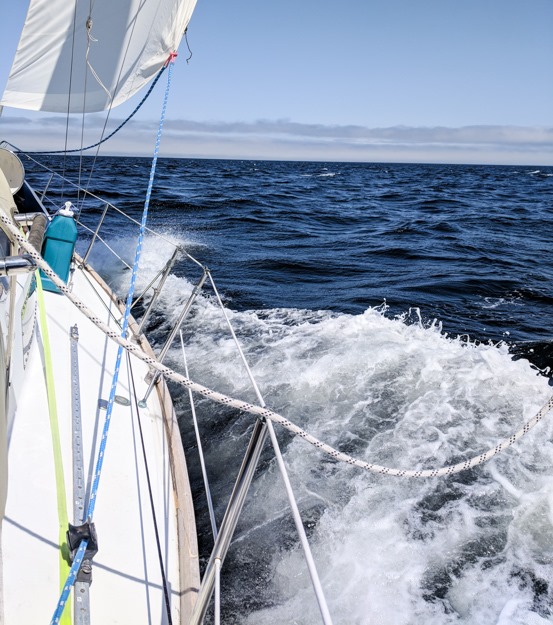 Picking our weather window and crossing strategy will be really important – if we do it right, and with a bit of luck, it could be a wonderful sail.

We picked Port Hardy for our provisioning stop before heading north. We had heard from locals who preferred Port McNeil that Port Hardy is a bit rough, but we found it to be fine. The Quarterdeck marina was perfect for us, and everyone we ran into was friendly. The Quarterdeck had a big laundry room with 7+ washers and dryers, which is always a big plus for cruisers.

We had a ton of chores to get done: groceries, liquor store, filling the water tank, trash, propane, diesel, and Internet time at the coffee shop Guido’s. 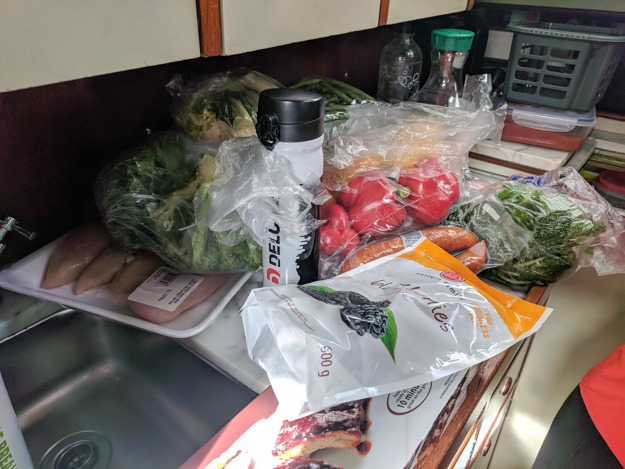 Leaving Port Hardy about 11:30am there was already 12-14 kts of wind up so we set sail right away. Unfortunately we had forgotten to secure our solar shower bag on deck, and it disappeared overboard as soon as we heeled over on our upwind tack. Doh!

As we entered Gordon Channel, the wind quickly rose. We reefed the main and genoa. We were still overpowered though, as the wind rose to a steady 20-22 gusting to 25. The ebb tide had started – a helpful lift to our destination – but it was wind against current (close to 2 knots on a spring tide) and this made for sharp, steep waves.

Ahead we could see S/V De Novo, a Seattle boat we had spotted at Port Hardy. They seemed to be doing much better than us, and continued on well past where we planned to take refuge in an anchorage.

Our boat is optimized for 5-15 knots of wind, perfect for the most common PNW conditions. We have a lot of sail area, and in 20+ really should double reef the main, but we weren’t prepared for that – the forecast of 5-15 had made us think we had an easy day ahead.

Upwind and overpowered in 25 the boat makes horrible noises – our main sail leech was flogging (we lost a batten last month, so the leech shape is bad now), the front of the sail was luffing from being undertrimmed as we tried to dump power, and that meant the sail slugs were chattering up and down the mid-section of the mast. Gusts were sending vibrations through the mast and boat.

We tacked an hour or two upwind to get to the Walker Group and then found two motor yachts were already in it. It’s a small anchorage and we weren’t confident we could fit, especially with the wind at 25 knots and 2-3 foot seas breaking right outside the fairly exposed anchorage. So we headed downwind back to the Deserters Group, undoing the last two hours of tacking.

Old boat in the north arm of the Deserters Group, which we explored by dinghy.

The Deserters Group was a really nice anchorage however, with a super narrow entrance and good protection inside – probably much better than the Walker Group. 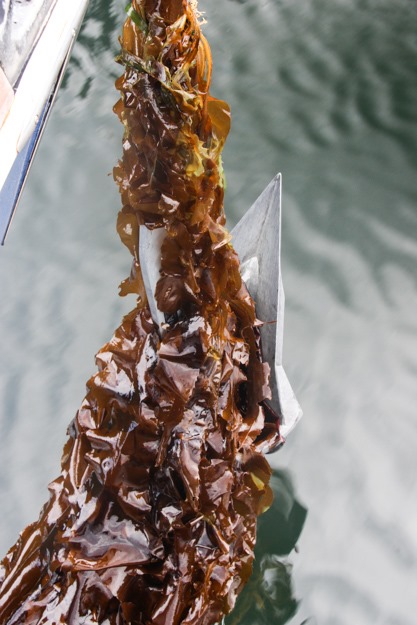 We’ve read some people have trouble anchoring in kelp. Our Rocna eats kelp for lunch and then comes back for seconds.

Deserters Group to Miles Inlet: Close Encounters in the Fog

After yesterday (the 5-15 forecast that ended up being 20-25), we figured today would be another windy upwind day. So as soon as wind started around 11 we left our anchorage only to find the wind disappeared and we drifted at 2 kts in dense fog.

We were monitoring AIS thru the app on my phone, and were aware of a sailboat motoring northbound in the channel we were in. Keeping a sharp lookout we saw him emerge from the fog 300 feet away heading straight at us. I couldn’t tell if there was anyone at the helm or if it was on autopilot with someone down below making a coffee. At the last second he turned away and waved to us, telling us he could see us on the radar. We were a bit shaken, and realized sailing in the fog is not very fun.

The wind died so we started motoring to the Walker Group 3 miles away, fed up with the fog, but then some wind came back so we figured the fog was clearing and decided to sail to Miles Inlet (our original goal). 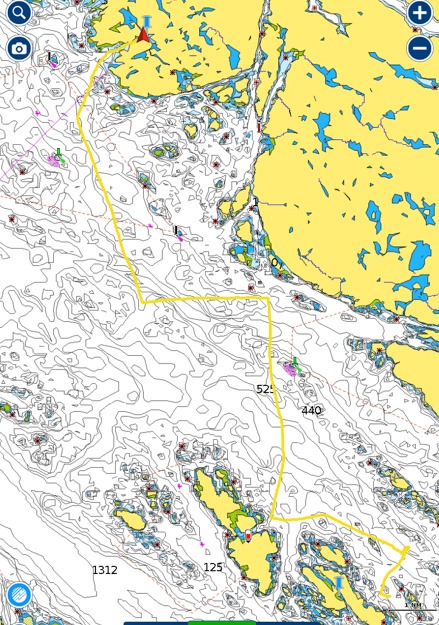 Our route from Deserters Group to Miles Inlet. Queen Charlotte Strait has a pretty crazy bottom profile in this area – explains some of the difficult wave and current conditions here.

We had dense fog the whole way but at least were able to sail, monitoring the radar and AIS. Entering Miles Inlet we couldn’t see rocks until they were 200 feet away – thank goodness for good GPS (plus we’re familiar with this spot, having been here before).

But I really dislike sailing in fog. It’s better than motoring in fog, but not by much. It’s super disorienting – you have no reference points to follow and the 3 foot swells we got approaching Miles Inlet made me seasick.

Miles Inlet is always a favorite anchorage of ours.

By this point we’d lost confidence in BC marine forecasts – they’d been off by a factor of 2x most days. We’ve switched to doing what the BC forecasters are probably doing anyway – “nowcasting” – look out your window to see what you see, and that’s the weather.

Cape Caution is worthy of prudent caution because it’s an area where the sea floor rises to extended shallows about 2 miles off the cape, and ocean swell coming in from the Pacific to the west heaps up there. High winds or wind against current can make things much worse. So we were pretty nervous going around Cape Caution – the furthest north we’ve ever been on our boat. 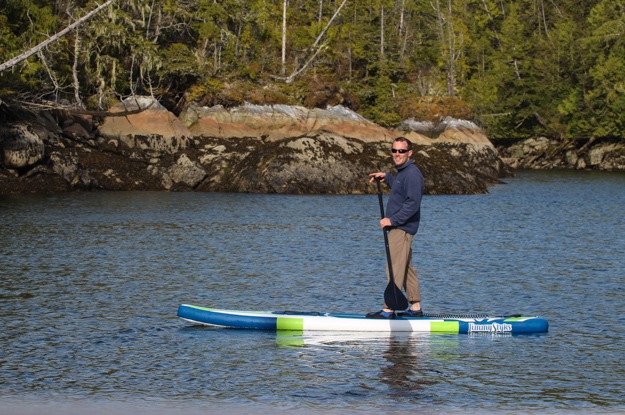 Paddleboarding in Miles Inlet in the morning I could see 6-8 knots of wind up, so we decided to head out. And it was sunny, with no fog! The waves were quite large though – 3 to 6 feet (West Sea Otter buoy was reading about 2 meters). Occasionally we’d get a set of two monster 9 foot waves though, off Slingsby Channel. This is a known bad area due to ebb outflow from the channel – we were 1-2 hours past what should’ve been the end of the ebb, but it appears the ebb lasted longer than expected.

We were tracking a southbound tug pulling a big barge of logs around Cape Caution heading towards us. As we dropped down into each swell he would disappear from view, and we’d see only a sea of wave crests. We called him on VHF 71 (the commercial channel here) and confirmed our plan for passing.

Unfortunately the wind was only 5-7 knots on the beam from the west, which isn’t enough to sail over 6 foot waves. We tried, and just got rolly with the sails slatting around. Waves with no wind is probably my least favorite thing about the ocean, other than fog with no wind.

Once we made it to Millbrook Cove (Smith Sound) though, it was a pretty sweet anchorage and it turned sunny and hot. 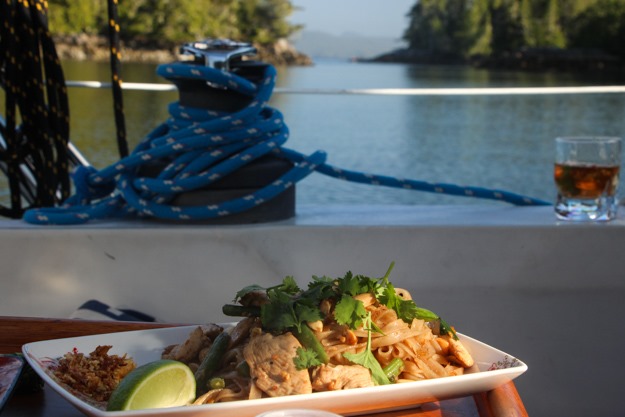 Natalie made some great phad thai in Millbrook Cove.

Despite three hard days, none of this was beyond our ability level, it was just uncomfortable. Perhaps pushing your comfort level is what cruising to new places is all about. And our reward has always been a beautiful, peaceful anchorage at the end of the day. Anchorages like these seem to make the hard times worth it. Next we’ll be heading north in Fitz Hugh Sound to Fury Cove and Pruth Bay on Calvert Island. 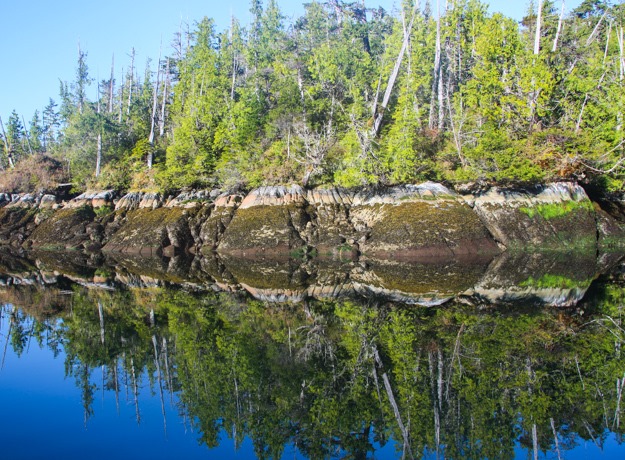 Nice reflections in Miles Inlet at low tide in the morning.