Green. Green and more green; and sometimes blue and white, when the sun emerges revealing blue sky and fluffy white clouds. But mostly what we see in the Broughtons is green – in the dense trees surrounding us, and in the water too – taking on a deep emerald hue caused by the reflection of so many trees.

There must be something about the color green that connects to the human soul – a color meaning peace, tranquility. Here in the Broughtons the blue and white aren’t always present, but the green always is. It’s hard not to feel like we’ve found a special place.

The Broughtons were our last major goal for this summer’s trip. We’ll spend a few weeks here, and then can turn around and leisurely make our way back to Seattle with the remaining month and a half (spending more time in Desolation Sound – which we rushed through a bit on the way up – and visiting Vancouver and Nanaimo). 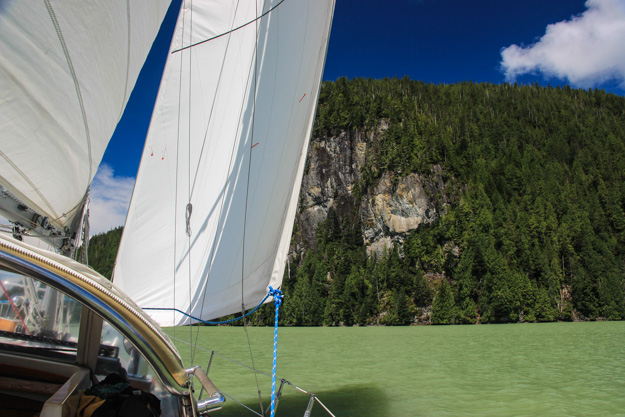 Our 2nd black bear spotting, in Shoal Harbor. I had to dinghy closer to get a decent picture. This guy seemed a bit small to me – maybe an adolescent?

We’ve had mixed feelings on the Broughtons however. So far the extra effort to get here from Desolation Sound hasn’t surpassed the attractions of Desolation Sound. The Broughtons are colder, more rainy, and we only saw the sun about 10% of the time here. And the small number of sailboats compared to motorboats has me feeling a little glum. The sailboats we do see are always motoring, even when we’re sailing (with 8-10 knots of wind).

Sailboats motoring upwind, and sailboats motoring downwind. And two trawlers and a mega power yacht for every sailboat. This creates the feeling everyone is just rushing from marina to marina, or anchorage to anchorage. Around noon every day there’s a procession of motorboats converging on the marinas.

There’s great sailing here, but the sailboats aren’t even sailing. I don’t know why, and it feels wrong to me. In the Gulf Islands, San Juans, and Desolation Sound, sailboats motor when there’s no wind but usually you can find a few sailing when there’s 5-10 knots. Here they all motor for the most part. Why get a sailboat if you aren’t going to sail it? The beauty of a sailboat is in the sails unfurled, gliding across the water, not belching diesel exhaust out the back. It make us feel like we’re doing it wrong when we’re sailing. Did we miss the memo?

I don’t want to give the impression the Broughtons are crowded though – it’s not hard to find less busy, nearly empty anchorages if you know where to go – mainly avoiding anything near the marinas, and avoiding the numbered anchorages in Waggoners.

The biggest edge the Broughtons has over cruising areas to the south is more wildlife – we saw at least five humpback whales, and two black bears.

Turnbull Cove is a popular anchorage (towards Mackenzie Sound), but it’s also large (if you packed them in like the San Juans or Desolation Sound, it could fit probably 50-100 boats – but today there are 9 powerboats and us, the lone sailboat). We found a nice little nook in the western corner, and the waters here are emerald green – we heard an algae bloom is causing the unusually chalky green color.

We took a dinghy ride to the NE corner, where a hiking trail leads to a freshwater lake. It’s a steep but short hike. I think it took us 18 minutes each way. The trail is well cleared compared to other trails in the Broughtons.

The float to the swim platform has seen better days, but we were still able to walk out by staying on the logs along the side. 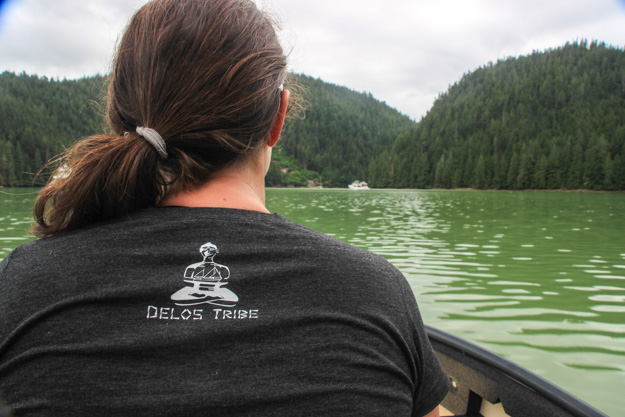 The highlight of our trip in the Broughtons was Nimmo Bay resort. We had made reservations for dinner at this small resort as part of our honeymoon – a bit of luxury to break up the sailing (which is often a lot of hard work). Nimmo Bay resort is a resort in the true meaning of the word. Sometimes when a place uses the word “resort”, it’s just an average hotel in a nice location. Or someplace with a hundred tourists sharing the same small beach. Nimmo Bay resort is small and personal – they had fewer than 20 people there for dinner, the staff knew us by name, and the location is a remote bay in Macquenzie Sound accessible only by boat or float plane.

One of the resident dogs. Super cute! 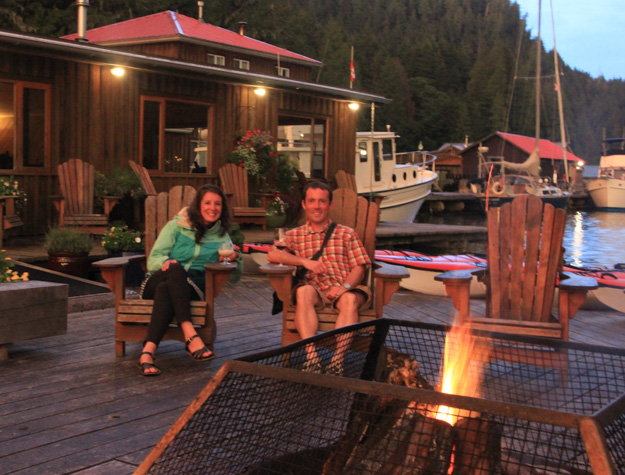 After dinner drinks by the fire.

We had considered stopping at Claydon Bay after leaving Mackenzie Sound, which would’ve made for a short day, but we had good wind and Natalie lobbied for sailing further. We managed to sail all the way there (from Claydon to Cypress) through fluky winds as it shifted around different mountains and channels.

Cypress Harbor looked like a mediocre anchorage at first – there’s a large fish farm on one side, and the anchorage on the other side didn’t have much room – an anchored log (not a log boom, because it was just one long log, but it was anchored) was taking up a lot of space, and another stationary log was taking up space in another area.

But the inner anchorage turned out to be perfect. The charts show it as quite shallow – much of it is marked 0-6.6 feet – but it seems like the charts are a bit inaccurate, or lacking in detail. Large portions of the 0-6.6 ft sections are more like 6-10 feet. That means you can anchor in the 20-30 foot section and not worry so much about swinging into the edge of the 0-6.6 ft section (which is really 6-10 feet for much of it). There were 4 sailboats in there.

This is where we saw our first bear this summer- a black bear was meandering along the grassy shore at about 9pm. We watched him with the binoculars – he was too far away to get a decent picture. 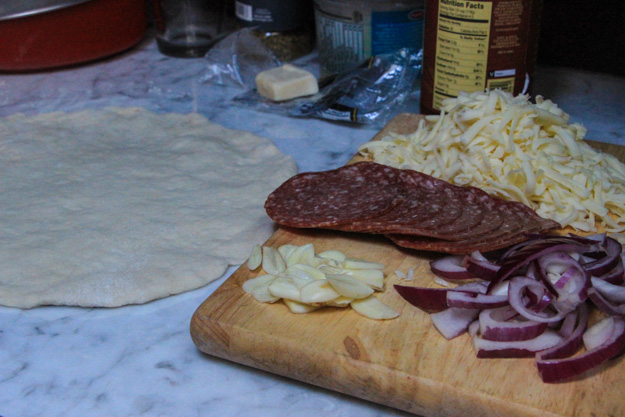 Pizza night again – pizza on the boat never gets old!

After anchoring in Shoal Harbor, we dinghied over to Echo Bay marina to reprovision a bit – we had read in Waggoners that there was a store here. The owner however wasn’t very welcoming – she told us the store was only a service for marina guests, but that she would be “nice” by allowing us to buy some produce. We understand marinas in the Broughtons have to ship in their groceries by speedboat, and that’s why we’re happy to pay a premium for them. But this was the first we’d heard of a store not being happy to sell goods to all customers.

Shoal Harbor was a good anchorage but there’s a big logging operation in it – active logging trucks with some noisy machinery, a log boom with several hundred logs moored in the anchorage, and some big bare strips in the forested slopes around the bay where the trees have been clearcut. We probably wouldn’t stop in Echo Bay again next time. 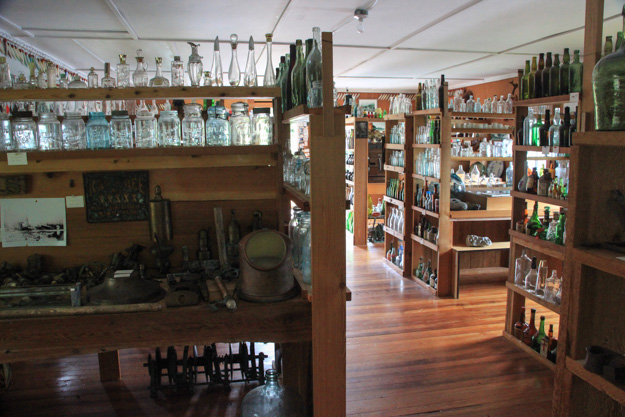 Ladyboot Cove is a small nook (that can fit 2-3, maybe 4, boats) in the Broughton Archipelago. There were hardly any boats in the archipelago – it seems like the powerboats stick to the larger anchorages closer to the marinas and away from the Strait. We took the dinghy out for an hour or two of fishing, because the shore outside the cove is reported to be great fishing grounds.

We caught a small rockfish, but he was too small to eat so we released him. Sadly we didn’t catch anything else and haven’t caught anything else in our Broughtons fishing attempts – it’s a lot harder than it sounds.

Morning fog rolling in. The sailboat here is one we shared the anchorage with.

We’re in Campbell River now, doing some reprovisioning and shopping. It’s been two weeks since we’ve had a place to dispose of our garbage (which was stinking up the lockers), or buy produce and meats at a major grocery store. Next we’re heading back into Desolation Sound.

3 thoughts on “Cruising the Broughtons”

From last season - Whenever we get to a new anchorage we throw our water toys (paddleboard) in the water so they're ready to go. 3 solar panels keep our beers cold (when there's enough sun!). #CruisingLife #Sailing #Sailboat #UpTheMast #Arial #SolarPower #OffGrid #Paddleboarding
I've been working on slides for our PSCC presentation in March. It's been a lot of fun looking through pictures from last summer. Excited to get back to it soon. #Sailing #WestCoast #VancouverIsland #Cruising #Spinnaker #PugetSoundCruisingClub #Sailboat
Sailing on the west coast on a grey day last July. Now is when PNW sailors start to daydream about their plans. What are your sailing plans for 2020? #PacificOcean #Sailing #Upwind #NootkaSound #Cruising #SailingLife
Latest on the blog: Details on how I replaced the lower spreaders on our C&C LF38 in December. Glad to have that done - 6 mast climbs on the winter! (svviolethour.com) #Rigging #Sailboat #C&C #Landfall38 #BoatProjects
Since we haven't mentioned here what we've been up to, we're in Mexico for 2 months, taking a break from the rain, snow and darkness of the PNW. First stop was Celestino (playa), now in Mexico City, and next up are Guanajuato, Guadalajara, and Puerto Vallarta. We're taking daily Spanish lessons with a great teacher! #expats #vagabonding #travel #digitalnomads #mexico #tacos #españolporfavor
New on the blog: How to Replace Frameless Windows on a Boat. (link in profile) This past November/December we finally had time to replace our 4 cabin windows. The difference was amazing - night and day! #boatlife #boatwork #boatprojects #sailing
Nuchatlitz inlet in July, west coast of Vancouver Island. The beach has lots of shells from old middens. #Cruising #Sailing #Exploring #BC #VancouverIsland #Midden #OptOutside
Winter time is when we think back to memories from our cruising season like this one from Rugged Point on the west coast of Vancouver Island. Eagles are very much abundant in BC! #BC #WestCoast #VanIsle #Cruising #CruisingLife #BritishColumbia #Eagle
2019 was a big year. We started out in Argentina, then traveled to Peru, Costa Rica and Mexico. In March we returned to the boat and began 6 months of cruising in April, including circumnavigating Vancouver Island for our first time. We're excited for more adventures coming in 2020! #bestnine #top9 #Sailing #SailingLife #Vagabonding #Travel #PNW #CruisingLife #Sailboat #Adventure #HappyNewYear