At last freed from the clutches of the boatyard, this was our first weekend cruise in a month or two. And we were lucky to have fantastic conditions!

Friday evening we took off early because I knew the sunny skies with 15-20 knot north wind couldn’t be passed up. We wanted to head south, so this wind was perfect to give our sail from Shilshole a jump start. When we left the marina around 5pm, the forecasted 15 knots had picked up to 20-22, so instead of raising a double reefed main and genoa we decided to simply unfurl the full 135% genoa. This worked great, keeping our boat speed around 6 knots. The C&C Landfall 38’s masthead rig likes a big foresail. 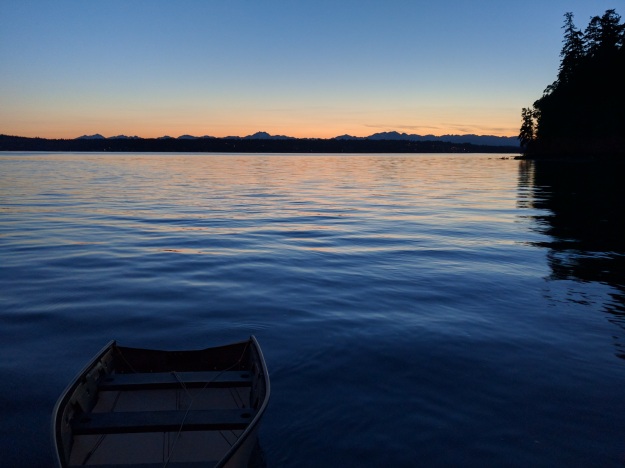 We anchored off the southwest corner of Blake Island. There were two mooring balls open there, but we wanted to test out our new Rocna anchor which was given to us as a wedding gift from friends (thanks!!!). The Rocna worked great, and the next morning held us in 2.5 knots of current – the SW corner of Blake has some of the highest currents (there were 5 fishing boats riding it in the morning), and we were on an almost spring tide (4 days past the new moon). 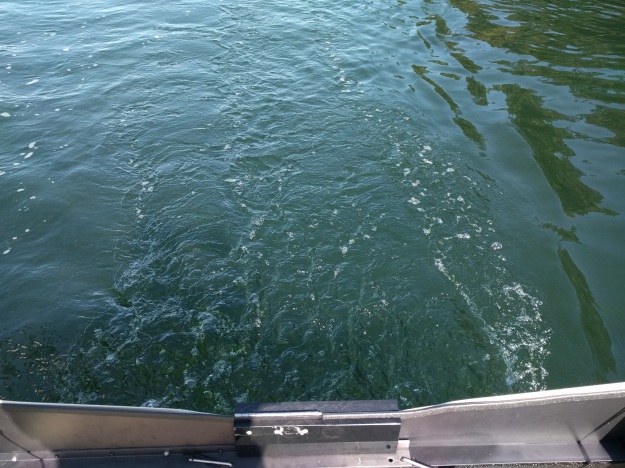 Turbulence flowing off the back of our stationary dinghy

It was really weird to get into our dinghy while the water was flowing past like a river. I was a bit worried we wouldn’t be able to row back, but fortunately the distance was only 150 feet or so and the current eases closer to shore. On a short beach hike we saw 3 raccoons (who scurried away annoyed we had disturbed their morning breakfast), an eagle, and two geese guarding their babies.

Upon raising anchor to leave, I noticed a strange sight at the northwest corner of the island – a mast was pointing at a 45 degree angle, right next to two vertical masts. Grabbing the binoculars it was clear a large sailboat had gone aground at anchor (or a mooring buoy?). They were either rafted to the other two boats or those boats had come alongside to help. There was a minus tide of -2.4’ around noon, and I felt bad for them because they had about a two hour wait before the boat would refloat.

Colvos Passage is the most direct route to Gig Harbor from Blake Island, but the current always flows north in it – strongly on an ebb, and less strongly on a flood. We timed our entry to the start of the flood, but still had from 0.5 to 1.5 knots opposing current. We tried to sail, but with only 5 kts of wind and 2 knots or so of boat speed equaling 1 knot GPS speed, eventually the motor had to come on.

Gig Harbor has a very narrow, shallow entrance (15’ depth where we passed through) and a 1-2 knot current pushing us in. With the hot summer-like day, paddleboarders, kayakers and other boaters were out en masse. The crowded harbor felt like Lake Union on a summer afternoon. There were two sailboats sailing in between the anchored boats and right up to docks.

We found a quiet spot to anchor on the north side, and then rowed the dinghy in to the Jerisich public dock. We walked to the well known Tides Tavern for a beer – a glass of their session IPA which is brewed by 7 Seas. I punched in “brewery” to my Google Maps search and discovered 7 Seas was only a block away! So for our next stop we went straight to the source and had an 8 sample tasting tray in the 7 Seas taproom.

We would’ve liked to find one of the two ice cream shops the Waggoner’s Guide talks about, but a search for ice cream in Google Maps turned up nothing, and we didn’t see any ice cream places on our walk back. Dinner was grilled Uli’s brats on the boat with grilled corn on the cob. It was nice to be back to grilling weather. 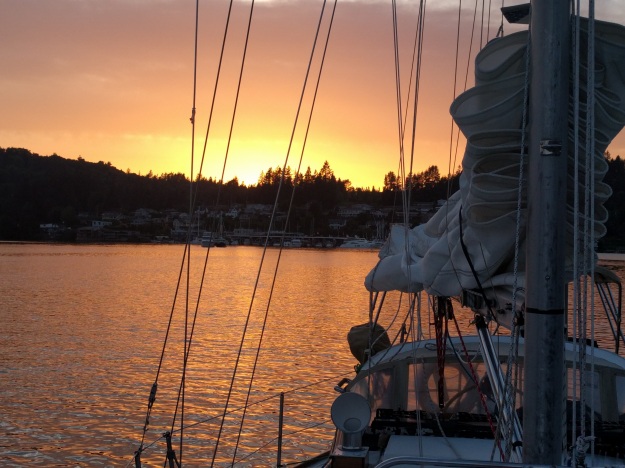 Another great sunset, this one in Gig Harbor

Sunday the forecast changed to south 10 kt winds because a front had moved in overnight. We didn’t even think it possible, but we had a spinnaker sleigh ride all the way back to Shilshole!  4 hours from Gig Harbor entrance to Shilshole entrance, with boat speeds of up to 8 knots and over ground speeds of over 9 (1-2 kt ebb current push). We haven’t had a lot of opportunities to use our spinnaker (usually we always seem to be going upwind – all downwind sailing on this cruise was amazing!), so this was good practice. It’s a big powerful sail, and something always seems to go wrong when there are only two of us to handle it. 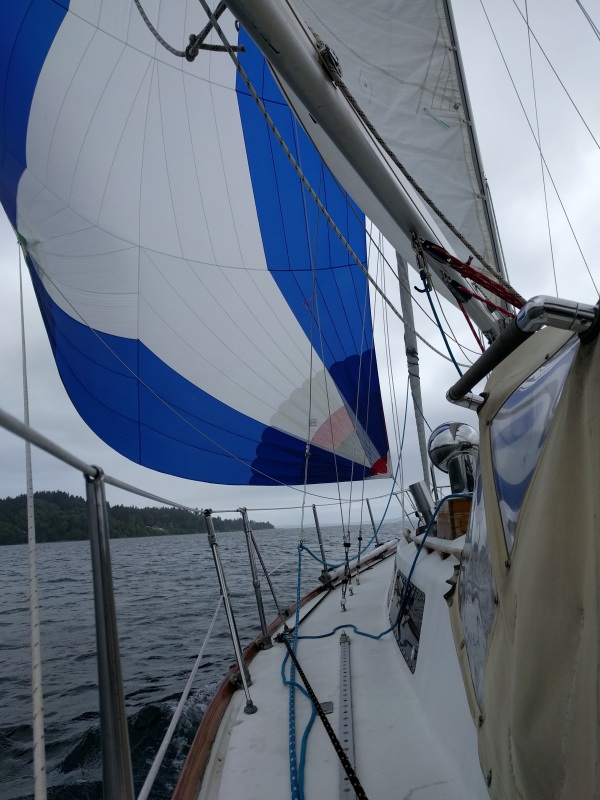 South winds typically don’t come with sunny blue skies, so this is about as good as we could hope – chilly and overcast but no rain!

We also got to play one of our favorite games – race the other sailboat. A pretty looking traditional cutter-rigged sloop was jibing downwind in Colvos Channel about a mile ahead of us. With our spinnaker up we started gaining, but it was a pretty even match. With the winds still light (5-8 kts) we had to jibe five or six times in the 12 mile long channel. Finally towards the end of the channel as the winds picked up to 15 kts, we passed him – and comically gave ourselves high fives.

Next we played my second favorite game – race the sailboat motoring downwind. Unbelievably, it’s not uncommon for sailboats to motor downwind in a perfect breeze. They probably should’ve bought a trawler, but I shouldn’t judge. Anyway, there was a 45’ Jeanneau going to EBM and motoring at about 7 knots who we kept pace with all the way from Colvos Channel to Elliott Bay. I love it when the power of sails matches the power of diesel. It really is possible to be an Earth-friendly sailor – in ~50 miles roundtrip we only ran the engine 4 hours (on Saturday when it was windless in Colvos), burning about 2.5 gallons of diesel.

2 thoughts on “A Cruise to Gig Harbor”