A couple days ago we tossed our docklines in Seattle and started our 2019 sailing season. Like last year we’re full-time cruising for spring, summer and fall. We’re excited to say we might finally circumnavigate Vancouver Island this year! We’ve been up part of the west coast twice (as far as Nootka Sound) but have never done the top half.

I say “Probably, maybe” because last year our probably-maybe plan was also to round Vancouver Island (but from Haida Gwaii). Cruising plans are never fixed, always flexible. Last year we changed plans because we were worn out from tiring, difficult crossings of Hecate Strait and persistently rainy, powerful southerly gales in the first half of June.

We had dreamed of some of the beaches and beautiful scenery of northwest Van Isle (like the Bunsby’s), but rightly decided to prioritize what’s most important in cruising – enjoying the adventure. (As Larry Pardey would say, “as long as it’s fun”). 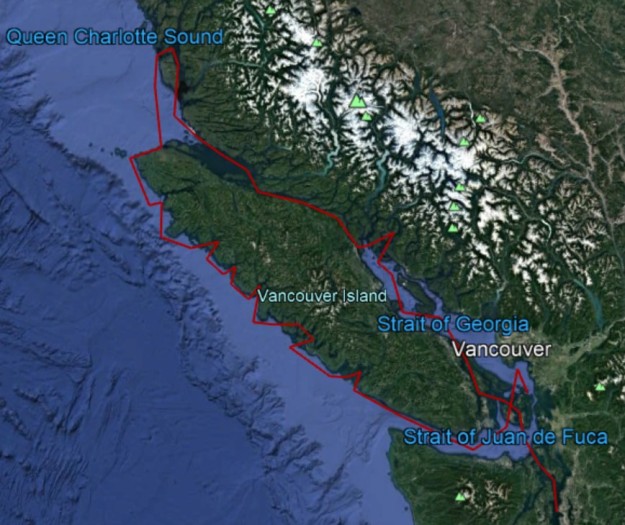 Gross approximation of our possible route (in reality we’ll spend more time in the sounds than this depicts, and may go a bit further north – ex, Shearwater/Bella Bella).

On our way north this year we’ll spend time hopping around Puget Sound, the San Juans, Gulf Islands, Desolation Sound, Johnstone Strait area, Queen Charlotte Strait, and probably round Cape Caution to visit Fitz Hugh Sound (especially Pruth Bay at Calvert Island!). Each of these areas are places we love and we’re excited to have 2-3 weeks to explore each and perhaps discover some new anchorages we haven’t been to yet.

Our go-slow, sail as much as possible style requires that we be in the right place at the right time – to avoid punishing storms and catch favorable wind whenever possible. We want to be rounding the top of Vancouver Island not too early but not too late.

Perhaps our biggest mistake last year was we arrived too early to the more exposed, challenging parts of our route (Hecate and Haida Gwaii). June is *not* summer yet in the PNW, and weather patterns haven’t stabilized yet. That’s fine when we can make short hops along protected waterways but more tricky for exposed areas like Queen Charlotte Sound and the Pacific Ocean.

So we want to do the west coast after the weather pattern stabilizes (mid to late June) but also don’t want to do it too late – August is “Fogust” on the west coast, and also when we start to run out of wind (and sometimes get a blanket of forest fire smoke). Therefore we want to be inside the JdF by August and then wait out the temporal wind hole before resuming sailing in September.

The funny thing about leaving in early April with a goal of rounding the top of Vancouver Island in late June to early July is that our timing strategy needs to be more focused on not moving too fast. Three months is more than enough time to sail from Seattle to Port Hardy or Fitz Hugh Sound, especially if we have abundant southerlies. So we have some mental checkpoints (flexible of course) like not exiting the San Juans / Gulfs until the end of April.

We had all of March to get the boat ready and catch up with friends + family, and it’s amazing how quickly the time passed – every week was packed. In the lead up to our departure date a couple days ago we had the normal frenzy of pre-departure tasks – provisioning, filling tanks, running unneeded gear to storage.

In between March projects we had some amazing views and a lot of great sunny weather!

We each had some anxiety over leaving – starting a long cruise is always a tough change, even when it’s a change you want. Natalie remarked, “Life is about to slow down massively.” Daily routines change and access to things we like in Seattle goes away. We found it didn’t feel the same as when we left last April, at the start of our adventure. The second time you do something never feels the same as the first.

We did a massive provisioning run at Trader Joe’s (and Fred Meyers) before departing. 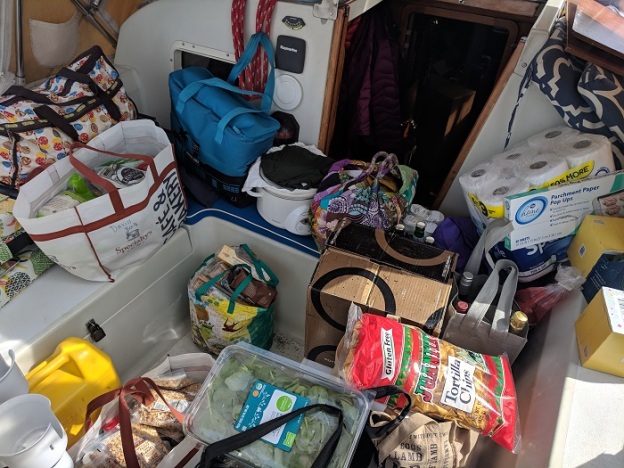