We’re now 6 months into living aboard, and it’s going great. Basically all the things we expected to be great, are, and the cons are manageable. We feel more connected with nature, have fantastic views and sunsets on a regular basis, and enjoy a simpler life with less stuff.

What’s more is we discovered a wonderful community at Shilshole which gives it a neighborly feel we never had living in the city. Living in apartments and condos over the last 10+ years, the most interaction we usually had with our neighbors was a “good morning” as they tore their eyes away from their phones in the elevator.

In apartments, though you’re close to many people, you really aren’t close with any of them.

At Shilshole we’ve done STYC’s Race Your House, hosted neighbors and trick-or-treaters on Halloween, and we know the names of most of the dozen or so people on our dock.

We’ve had a few logistical challenges which we didn’t expect. Much of the preparatory advice we heard focused on the obvious things (like the weather) rather than the practicalities (how to change your address, where to put stuff, etc).

The classic problems have been easily addressed for the most part. Rainforest-like condensation? Easily fixed. The cold, dark winter weather? Nothing you can really do about that but have a good attitude. But our heater has helped (more on that later).

Here are the top 5 unexpected challenges we’ve had from our point of view:

The top expected challenge we’ve had is of course: 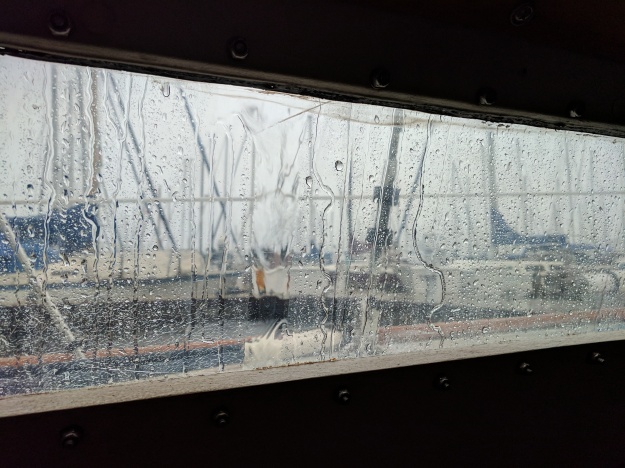 By the way we’re a fan of this DeLonghi oil heater because it’s safe and compact, with a squat profile and sturdy feet (you don’t want roller feet on a boat!) so we don’t have to worry about it tipping over.

We also have a Caframo heater (a model West Marine also sells, rebranded at a higher price) which uses a fan to blow air over heated plates. Other things that help are closing bulkhead doors, turning the boat around to face the bow into the southerly wind, and putting up our full enclosure to reduce drafts from the cockpit.

Of course, our Eva-Dry 4000 dehumidifier is also essential and runs non-stop, doing a great job of keeping cabin humidity to a level where it doesn’t rain indoors.

Side-Note: Getting an Outboard at an Auction

Last week we heard about a public auction of the Ballard Inflatables Store inventory (the shop closed up – we heard the owner retired). We had never been to an auction before – let me tell you, it was an interesting experience! It was basically a huge lot with tons of stuff, and an auctioneer driving around doing the fast-talking style I had only heard in movies. There were near 1000 people there, all braving heavy rain to score some deals on marine equipment.

The auction prices weren’t going as cheap as I expected (I imagined about 50% off retail, because all these items are untested, non-returnable, and without warranty); but instead everything was going for just a little less than whatever you could sell it on Craigslist for. Nearly every item had multiple bidders. We also learned that Natalie should bid instead of me next time – bidding happens in fractions of a second, and I don’t make decisions quickly, so she’s way better at auctions.

In the end, we got a new 6 hp Tohatsu 4-stroke floor model for $400-500 less than it normally goes for (but, an auction means no warranty, so take off whatever you value that at). Was it worth it? Probably, but just barely – 2 hours of driving (you have to come back a different day to pick it up), 3 hours of standing in the rain, for a motor of unknown condition, missing a few accessories (the kill switch cord, spares, manual). But, it was an experience for sure! 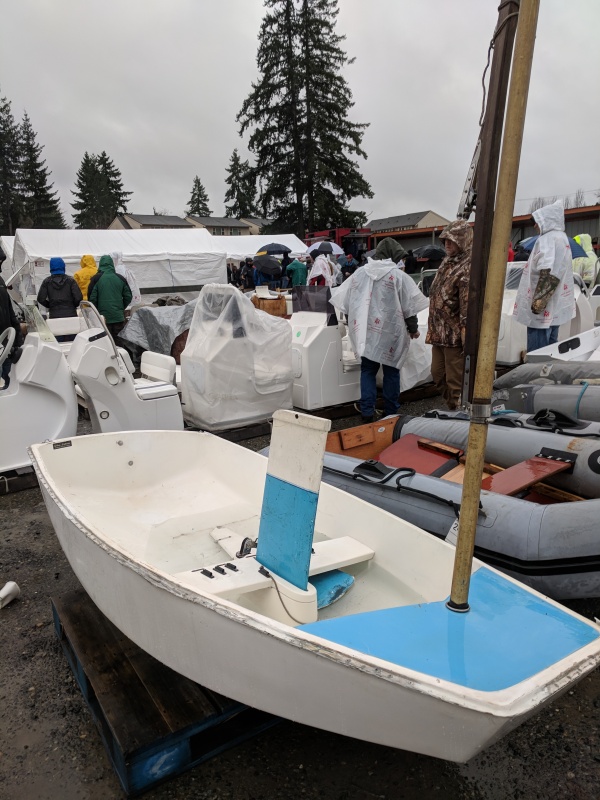