The U.S. and Canada have kind of a friendly rivalry. They’re good at healthcare and hockey, we’re good at BBQ and football. This weekend we’re hoping to rescue our boat back from Canada and return it to its original U.S. roots (it was built in Rhode Island, and had one or two previous owners in Washington).

I’ll talk a bit about the logistics of buying a boat from Canada when you live in the U.S. First, obviously there’s the exchange rate to think about. Historically USD – CAD has favored Canada for the last 5 years or so, but in the 1 1/2 months since I put the offer in on the boat, the US dollar has had a terrific run to strength. Here’s what 1 USD will get you in CAD since December: 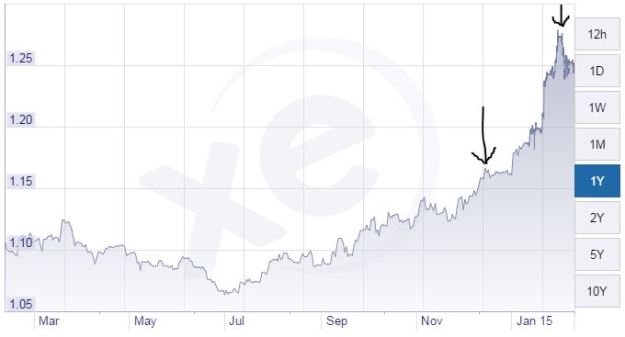 The broker used a U.S. title / closing company to handle the closing and currency exchange. They do the title paperwork, pass the money through an escrow account, and handle your Washington registration and sales tax. Their fee was $400. I started researching options for a good exchange rate through my banks or using an online exchange transfer like TransferWise, but it turns out the titling company was able to get near par (mid-market) rates.

To bring a boat back to the U.S., you need to bring it through customs at a U.S. port. The documentation company told me you basically have to do it through Point Roberts or else at the other ports (Anacortes, Friday Harbor, etc) you’d need to hire a customs broker.

I learned I couldn’t take delivery of the boat in Canada, because doing that would risk Canadian revenue authority perhaps thinking I owe them Canadian sales tax (GST/HST at close to 13%). Then I’d be paying double sales tax! (9.5% Washington and 10+% Canadian). This was a surprise to me since I hadn’t recalled the broker saying this when we had initially toured the boat. It meant I needed to have a delivery skipper bring it to Point Roberts.

This is kind of disconcerting to me since I’m a do-it-yourself kind of person. The idea of having someone else drive the boat even just a short trip is a little unnerving. It’s kind of like handing your manual transmission car over to a valet driver who might mess up your transmission if he doesn’t know how to drive stick well. But the skipper sounds good and it’s a short run (32 miles) so I’m sure it’ll be fine.

Point Roberts is a strange little corner of Canada that is U.S. territory even though it’s not accessible by land without leaving the U.S. first. We’ll have the pleasure of driving through border security twice in one hour.

I called Point Roberts and they said we’d need to fill out a form [link], show proof of ownership, and pay a $19 fee for the user decal (not sure what this is for / does, but it’s one of those required government bureaucracy fee things). We don’t have to pay an import duty (typically 1.5-2%) because the boat was built in the US.

If all goes well, we’ll be bringing it back this weekend. Here’s an approximate route we may follow: (we haven’t decided yet if we’re going through the San Juans via Friday Harbor or around them) 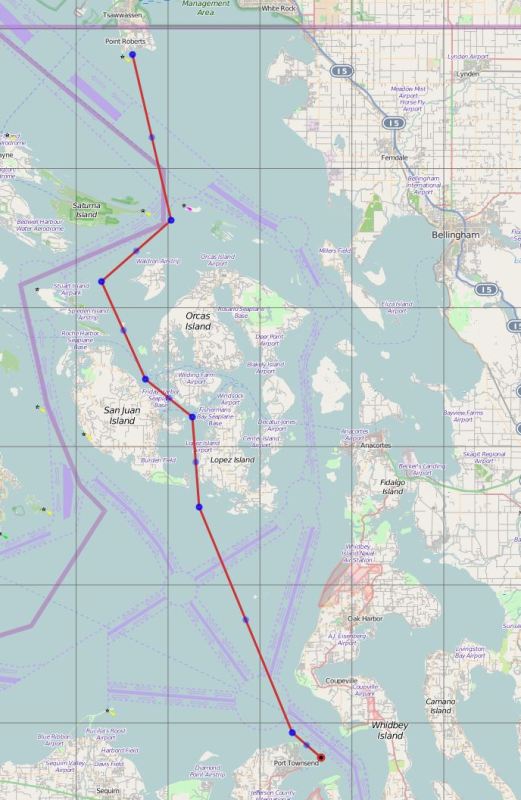 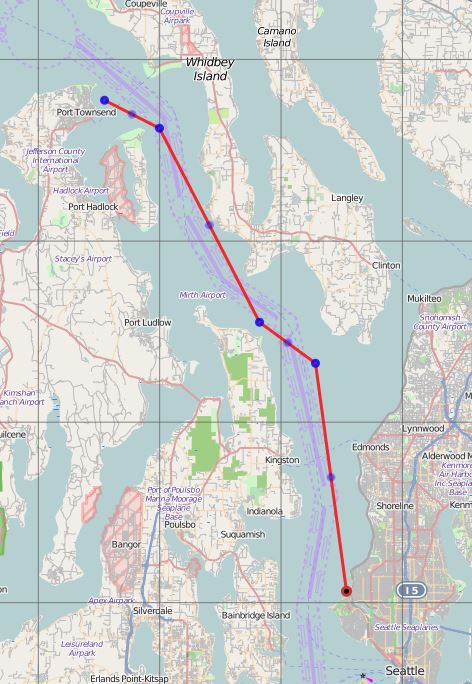