With the Canadian-US border closure extending into a 3rd month (though June 21) and no plan for reopening in sight, we’ve had a lot of time to think about what that means. The closure of the longest border in the world is truly unprecedented, and has all sorts of secondary consequences which are non-obvious. The Peace Arch at the Washington / BC border actually says “May These Gates Never Be Closed.” Well they’re closed now (sort of).

We’ve been waiting to enter Canada for 2 months now – we normally live there for 4 months over the spring/summer, pretty socially isolated on our boat in remote wilderness areas. So this spring has been quite different, and we’re discovering that we’re much more dependent on BC than we realized. We’ve realized that travel, exploration and seeking new challenges is a key source of purpose when you’re full-time sailors. Washington waters are wonderful, but they’re less than 1/4 the size of BC.

We love Canada. We’ve always found the people there welcoming and friendly, and in many ways we’re equal parts Canadian and American. Last year we lived in Canada longer than we lived in the US. We don’t think of ourselves as tourists in Canada; rather, we move to Canada to live there. But unless you have a permanent resident card or an essential reason (such as a job) you can’t get into Canada right now.

Side Note: I understand the world has many problems right now, and writing about what may seem like trivial problems is not intended to minimize the other issues. I write about this because it’s what I’m familiar with.

The Border is Only Mostly Closed

One thing many seem to not know is that the border is porous – there are still thousands of people a week traveling across the border. There are numerous exemptions to the closure, including for essential workers, commerce, etc. Some of those people are also exempted from Canada’s 14-day quarantine rule (ex, truck drivers delivering supplies or medical workers).

In our modern world, all countries are interconnected – it’s a global economy now – and the US and Canada are heavily interconnected due to their proximity and many years of cooperative trade.

A resource I follow on Canadian immigration has this interesting article on the guidance the CBSA is using on who is allowed to enter:

One source I read said that thousands are still crossing the border each week, but this is only 2% of the normal traffic – so basically the border is pretty closed but not totally closed:

So the border closure doesn’t stop the spread of coronavirus, it just slows it. Presumably it’s intended to give governments time to make a plan and get resources in place.

The inland waters of Washington are relatively small in comparison to the British Columbian coast. Although we’re fortunate to have hundreds of anchorages and a few long, winding inlets to explore, BC has far more. What this means is that Washington boaters (and some Oregon boaters who travel north to WA+BC) are now confined to a smaller area than usual.

In May we noticed some anchorages getting very very busy – possibly even beyond summer-time crowding. This is likely partly due to the fact San Juans marinas were closed (and still are), so boaters that would usually visit a marina are spending more time in anchorages now. 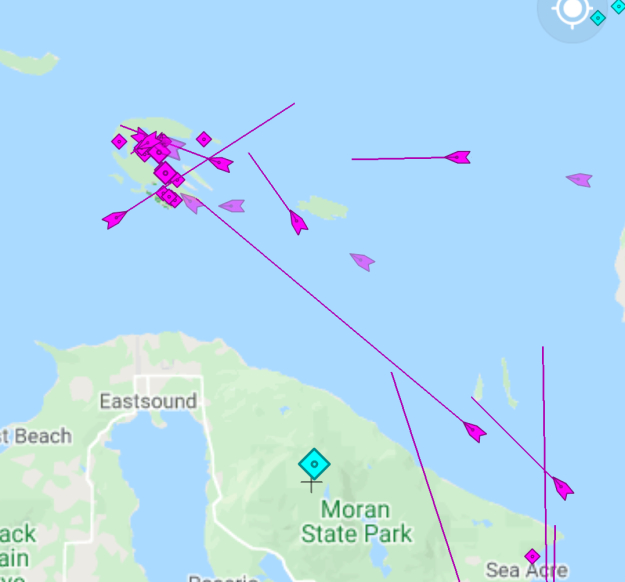 But another aspect is the huge difference between Washington and BC in terms of size and number of boaters. BC is much, much larger than Washington, but has fewer people (5 million vs ~7.6 million here).

BC has 17,000 miles of coastline. I can’t find a source for Washington’s coastline, but you can fit Puget Sound + the San Juans into 1/4 of BC’s coastline so it’s clearly much less.

The red square really puts into perspective the spatial difference!

It seems likely that if the border remains closed, WA waters will continue to be pretty crowded, given that boats that would normally disperse north cannot, and many have realized that boating is a safe social distancing activity. It should be noted though that BC boaters do sometimes come south to the San Juans, and so they are also affected by the closure.

The Inside Passage to Alaska is a historic water-based route to Alaska that travels through BC. That’s now closed to recreational traffic, including cruise ships. Cruise ships were previously banned (from Canadian ports) through July 2 but that was recently extended to October – which is effectively a one-year ban, since no one wants to take a cruise ship to Alaska in the winter. Commercial boats can still travel to Alaska through BC though, including fishing boats, tugs, etc.

Interestingly, cruise ships are only banned from Alaska due to some legal oddities (some of their own making) – most cruise ships are foreign flagged, in order to avoid higher US taxes and stricter labor laws. And a federal law requires foreign flagged vessels transiting between 2 US ports to stop at a foreign port in between – typically this was Victoria or Vancouver. With that not allowed, only one cruise line can legally get to Alaska (American Cruise Lines which is US flagged).

Yes it’s hard to have sympathy for cruise ships, but easier to have sympathy for the Alaskan businesses that depended on that traffic. Alaska’s economy is heavily dependent on tourism, and their good weather season (when most of that happens) is so short – mostly just June, July and August. So Alaska is faced with losing an entire year’s worth of tourism revenue. With BC closed, far fewer boaters than usual will make it to Alaska.

This week though Alaska said they’ll be re-opening to air travel, if visitors get a coronavirus test in the 3 days prior to their flight or at the arriving airport.

Impacts on BC Waters

BC boating is starting to reopen, but a number of things remain unclear. Some of the native communities in isolated locations with minimal medical facilities are justifiably concerned that they not have visitors. Many of the native communities however co-exist with non-native communities – some good examples include Walter’s Cove on the west coast of Vancouver Island, Alert Bay with ferry connections to Port McNeill, and Bella Bella / Shearwater on the Central Coast.

Boaters can easily avoid the native communities, but if those communities aren’t severing all their ties to the outside world (for mail, groceries, fuel deliveries, jobs, etc) it’s not clear to me how long that strategy of isolation will work. Other than a few very isolated communities in the world, there are very few towns in existence today that don’t have any dependencies on the outside world.

Another question is what will happen to businesses that depend entirely on boating-based tourism like those in the Broughtons and Desolation Sound? Places like Sullivan Bay marina in the Broughtons and Refuge Cove in Desolation Sound. There are also expensive resorts and fly-in fishing charters. If they have greatly reduced visitors (only Canadians) they’ll miss out on a year of revenue in the same way that Alaska tourism businesses will.

The Big Question – When Will US-Canada Reopen?

Currently the border is closed through June 21. This is the 3rd month that the closure was extended. I think the most frustrating part is that there is no plan. The lack of even a semblance of a plan is frankly shocking. If there were criteria or a plan around reopening the border, at least people could make some plans based on that. But so far the US leadership has not spoken much about it in any concrete terms, and Canadian leadership has said they want to keep the border closed as long as it’s necessary to keep their residents safe. It’s not quite clear what that means though when coronavirus could be around for 2 to 5 years or more.

So far with each of the previous dates, we thought there was a decent chance of reopening and then as it got closer to the date it became clear it wasn’t going to happen. Things are looking a bit more promising now though given that states / provinces on each side have plans for themselves (and BC is in phase 2). And international borders in a number of other areas have already reopened or have plans to reopen – including much of Europe.

This article yesterday (from an immigration newsletter I follow) also has some reasons for optimism:

So we’ll continue waiting, like so many in the world now. But it would be nice to have a plan.