We’ve been mostly at anchor for over a month now, and social distancing for over 2 months. Washington State is starting its 3rd month of modified social behaviors (the Stay-At-Home order was mid-to-late March, but we started social distancing as early as March 1). We normally spend 1/3rd of our year living in British Columbia, so to be cut off from friends and beloved locations there has been really hard.

While we’re fortunate overall, the feelings of uncertainty and frustration have been hard, as they are for everyone right now. One thing brought to our awareness is that many people don’t understand the different types of cruising boaters. People tend to assume that all boaters have a home on land, and that when they go cruising they’re traveling away from home and hopping between different marinas each night. To them, being on the water is a vacation, but to us it’s life.

Even amongst the sailing community there’s a lack of awareness of cruising lifestyles and the different constraints faced. So it’s no surprise that government officials making decisions affecting ports / marinas are unaware of these differences as well. 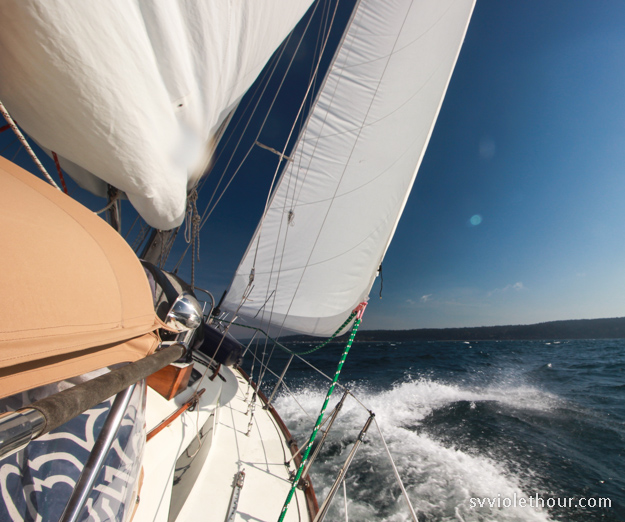 Cruising boats fall into basically three categories, resembling an inverted pyramid. Category A, at the top and by far the largest, is boaters who have a home on land (house or apartment). This category is at least 95% of boaters in the Pacific Northwest and they have a lot more options (they can live in their land home, may have a car, their own laundry machines, a shower with hot water, reliable Internet, etc).

Category B is liveaboard boaters without a land home but with a permanent home port or monthly moorage contract. This is probably less than 5% of cruising boats. They often go cruising in the summer but still have the home port / moorage contract to fall back on.

And category C, probably less than 1%, is liveaboard boaters with no home port or monthly moorage. Sometimes called “full-time cruisers,” however this is a bit misleading because it implies they’re always on the move (“cruising”) which is not necessarily the case. Out of the hundreds of cruising boaters we know, we’ve only met a handful who fall into this category in the Pacific Northwest (they represent a much larger percentage in the tropics / trade-wind routes).

Each category faces different constraints, and it’s not as easy to switch between categories as one might think. To move from A to B took us over a year, and involved selling our condo, giving away many possessions (including all our furniture), and optimizing our life for minimalism on a boat.

Then moving from B to C in 2018 also took over a year, and meant we cancelled our moorage contract at Shilshole, put our car and a few more possessions into storage, and optimized our finances / lifestyle for living remotely with no attachment to any particular port or location.

With the coronavirus crisis we’ve seen many officials and even the boating community treating cruising boats as if they’re all the same, particularly in thinking everyone has a land home or port to stay at. At times it’s felt like we’re suddenly members of a very small, marginalized group. Yet we know we have it better than full-time cruisers in many other areas of the world now –  such as Mexico and the Caribbean, where restrictions have been much harsher (to the point of not even being allowed off the boat for essential exercise).

All this has led to some anxiety and questioning of our plans (or lack thereof, due to the unknowns). We could try to temporarily convert back to category B, getting monthly moorage in a marina. But this isn’t so simple – some places like Bellingham and Shilshole have multi-year waitlists; plus pivoting our lifestyle takes some time. There’s also the fact that being in a marina wouldn’t necessarily be better – we’d be much closer to many more humans, vastly increasing the chances of getting (and thereby spreading) coronavirus.

Being in a marina would be easier though – the few times we’ve been in a marina the last month for water and food, we’ve been jealous of how much more socialization marina liveaboards have. They see many people every day, and sometimes get to say hi to them from 6 feet away! That’s a lot more human interaction than we get at anchor. Even though there are other boats out at anchor, most are keeping to themselves.

It’s looking clear that coronavirus will be around for at least 2 years, and if the border to Canada doesn’t reopen then our cruising grounds are vastly reduced. Sailing is normally our (unpaid) job – it provides our motivation, goals, and purpose. With cruising on pause, we have nothing to fall back on for purpose (an essential ingredient to long-term happiness).

Certainly others who have lost their jobs are struggling with this problem and much worse now. We’re hurting for the small towns we know that are basically dying because they’re 90% dependent on tourism. With the peak season being May-August, if they miss this season’s income they’re essentially losing the whole year, and it’s unlikely many businesses in the small towns we normally visit can survive that.

So the big question is when the US-Canada-Mexico borders will reopen. It took us years of work to get to a lifestyle oriented around travel and cruising, and if travel is going to be off the table for a year or more we’ll need to figure out a backup plan.

I’ve also been frustrated because April and May are the prime sailing months in the Pacific Northwest, when the wind is frequent and consistent, with plenty of southerlies for sailing north. But we can’t take full advantage of those southerlies now.

The good news is we like life at anchor for now. After a month it’s starting to get a bit boring, but that’s true for everyone staying home right now. We spend a lot of time on exercise / wellness – hiking, yoga, Barre, etc. And a lot of time on cooking, tending our boat garden (herbs and green onions), and boat projects / maintenance. 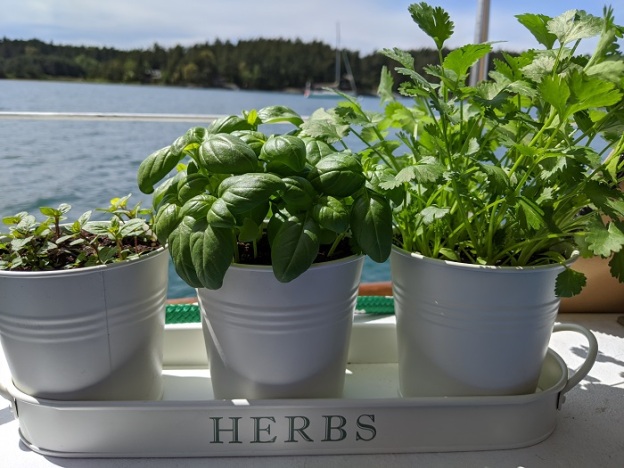 We’ve seen a lot of heron eggs (I think?). Apparently slugs like the remains.

One constant struggle has been avoiding the anxiety produced by reading the news and Facebook or Twitter. I rely on these sources to get information about changing rules, but Internet communities have devolved into a morass of shaming, misinformation, antagonism and political polarization. This has made me depressed at times about the state of humanity and the world, and I’ve started limiting news / Facebook time.

It seems that less is changing now anyway, as Washington officials seem intent on keeping the lockdown in place as long as possible, even though we flattened the curve 6 weeks ago, have very small incidence rates, and hospitals that are all well under capacity.

If you like following the data for coronavirus trends, Robert Williams / isfBob on Twitter has been producing some of the best charts and data analysis I’ve seen. He only has 3500 followers which is nonsensical considering how great his charts are. In recent days it’s shown how fantastically well Washington is doing at social distancing, with our state sinking to one of the lowest growth rates in the nation (1-2%, putting us lower than 40+ other states), and flattening the curve (passing peak) 24 days ago on April 10.

I’ve also been listening to a lot of podcasts, especially NPR’s Planet Money, NPR’s The Indicator, and Freakonomics, all of which have good coverage of the economic and social impacts of coronavirus.

We’re okay staying at anchor for a month or two not going very far, but aren’t sure we’d be happy doing that for 6 months. Sailing and the challenge of navigating different waters is what normally fills much of our days, and we’re realizing if this extends long-term we may need some alternate options. We could sail to Oregon or Hawaii or offshore to Alaska, but would face the same limitations and restrictions there.

But for now, the sea is still the sea, and everything is proceeding like normal in nature. Being outdoors is healthy on the body and mind and we like feeling connected with nature, observing the eagles, seals, otters and oyster catchers at work. We don’t even mind the crab claws and guts they leave in our dinghy sometimes. If coronavirus is destroying the world, nature certainly hasn’t gotten the message.

12 thoughts on “Life at Anchor: Coronavirus Thoughts Going into Month 2”